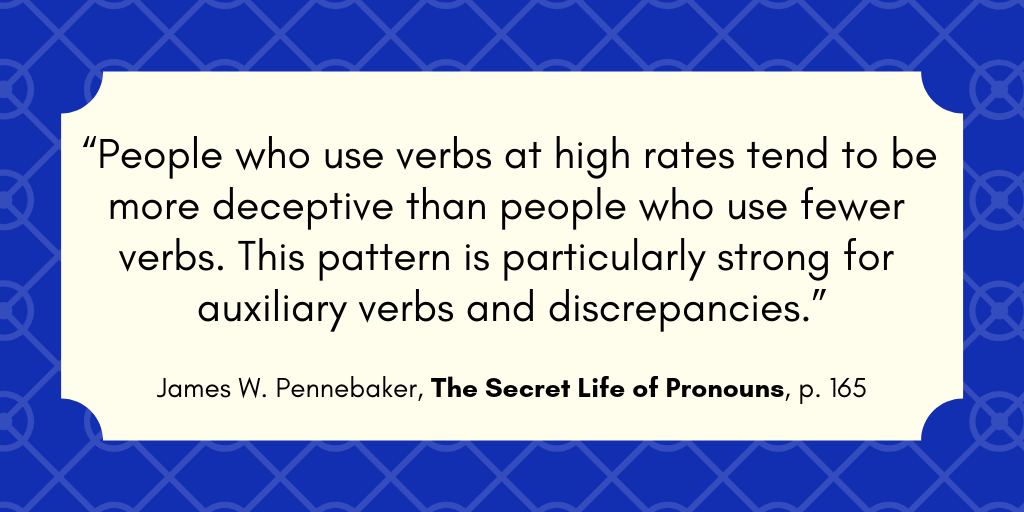 Our barrier object series continues with expanded verb structures. These come in a variety of forms.

A Rundown of Verb Features

In the simplest of sentences, the verb expresses only Tense, past or present.

In English, future tense requires addition of a modal, will.

The verb structure expands to accommodate this: “meet” loses its inflection and “will” assumes the tense feature.

As more verb features add into the mix, the structure expands further. Auxiliary verbs be and have assist in Aspect and Voice, and auxiliary do assumes the tense feature for negatives, emphatics, and the interrogative Mood.

Modals (AKA ” discrepancies”) express conditional or hypothetical attitudes towards the words spoken.

Each of these additions causes a subtle shift in meaning for the verb phrase as a whole. Whichever verb—modal, auxiliary, or main—appears at the front of the structure carries that essential Tense feature.

This tense-bearing verb, then, is the most important verb in any sentence, structure-wise. But semantics-wise, the main verb always carries that torch. And the farther apart they are, the more diluted that main verb becomes.

If a sentence requires additional nuances, these expanded verb structures serve a necessary purpose. However, especially in patterns of deception, extra nuances slip in unnecessarily, and the structure carries more baggage than needed.

Both give the reader the same semantic information, but Sentence #2 is more efficient about it. Sentence #1 has added a progressive aspect, even though there’s no other event occurring at the same time as John’s glare. The aspect, then, is gratuitous.

A single three-letter word might not be much for a reader to gloss over, but when it becomes a pattern of usage, that gloss becomes a game of leapfrog. This goes for extra modals as well as auxiliaries. Any string of function words beyond the main verb (the semantic powerhouse) merits scrutiny.

Here we have 6 (six!) verbs in a row. They are two separate verb phrases, (she) might have made and having been stifled, both of which modify “retort.” Only the past participle stifled carries distinct concrete meaning, while everything else adds nuance.

And we can reduce the whole ungainly string into a single modifier and that past participle:

This revision gives the exact same semantic information to the reader, but without so much structure to stumble through.

In addition to unnecessary verb features, this barrier object occurs in a crop of semantically weak verbs. These are verbs that combine with other verbs or else with nouns that point to an event to create their overall meaning. For example:

An expanded verb of this ilk has inefficiency built into its structure.

The [verb]-ing participles of the first bullet are where we find the more important semantics of the phrase. The reflexive nature of find oneself [verb]-ing creates distance between the subject and the action, as though a character isn’t wholly in control of themselves.

In the case of begin, start, and continue, unless the action gets interrupted, there’s no need to specify that it begins or continues, because that’s already implied in context. Compare,

Both say the same thing, but the second is more direct. However, if we add an interruption, the “began [verb]-ing” structure becomes justified.

Aspects happen in concordance with another event. On their own, they become expendable.

As with strings of modals and auxiliaries, weak verbs that take infinitives as their complements can stack up like a conga line.

Add in any aspects or moods, and this could easily spiral out of control.

(But confession: I’ve made a game out of stringing lots of verbs together in a plausible sentence. So far my longest string is nine: “She might have been being coerced to pretend to try to like to dance.” Once you hit the main verb, it’s over, haha.)

In these cases, outright revision is the best bet to eliminate the string, unless you really, truly need it.

It’s not semantically exact, but it’s close enough that the same sense remains.

Of particular note in our above list of weak verb examples, make and take fall into the category of light verbs, along with do, have, and give. If you look them up in the dictionary, their entries can span over multiple pages, because their meanings have diluted to a bland meh that requires modifiers. They are the unseasoned starches of the language.

And why would we purposefully use them? In many cases, these expanded verb structures have no different meaning than their simpler counterparts. If you make a decision, you decide; similarly, to make an escape = to escape, to take a seat = to sit, to take a bite = to bite, and so forth.

The primary difference lies in structure, not in semantics. Weak verb phrases say very little in a lot of words. Revising for more precise language simplifies these structures, which allows the reader to access the story without wading through that slew of extra verbiage.

Don’t bog down the reader with too much structure. Our brains actively look for the verb in the sentence, so keep it efficient.

Tl;dr, simple tenses are better; save the expanded verb structures for when they’re necessary.

Up next: Hedges and Qualifiers