The next offender in our sequence of barrier objects is a big one: filter verbs.

What do all of these sentences have in common? They all use filter verbs.

You may or may not have heard the term before. Some people call them “tell” verbs (as opposed to “show” verbs, from the infamous writer’s adage, “Show, don’t tell”). Some refer to them as sensory verbs. They appear when the focal character filters the narrative through their lens of experience, a rhetorical bottleneck between the reader and the action.

The category of filter verbs does include your standard sensory verbs, but also anything that happens inside a character’s head. And inevitably, any prescriptive discussion of these offenders produces a list of words to avoid.

I don’t like these lists. They’re never all-inclusive (because they can’t be), and they fail to address the underlying issue. Writers eliminate one filter only to replace it with another, because it’s not a word problem at all but a structural one.

So here’s the skinny on identifying filter verbs:

It is a filter verb if the character is making an observation instead of acting or being acted upon.

In linguistics, we call these “verbs that assign an experiencer argument to their subject.” And really, there’s nothing structurally wrong with them. The issue lies in our layers of dialogue. Your reader is supposed to be the experiencer. Filter verbs make them experience events second-hand instead of immersing them in the story.

The “experiencing” character becomes the barrier.

The Syntax of Filter Verbs

Filters form a barrier in sentence structure itself. To illustrate this, take a look at the x-bar diagram for Sentence #3 from our list of examples above. 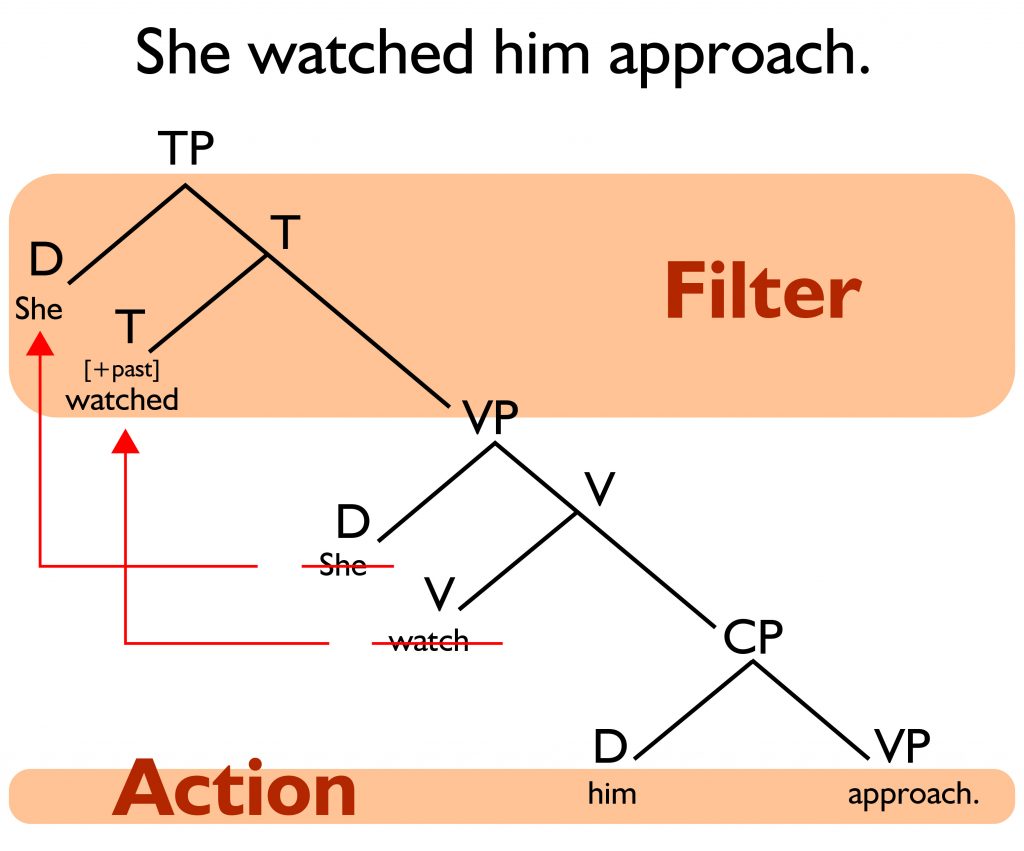 According to minimalist syntax, everything with concrete meaning starts in the Verb Phrase (VP), and certain elements take on grammar by moving up into the Tense Phrase (TP).

Now imagine yourself standing at the head of that sentence, by the letters TP in the picture. To get to the lexical meat, the action, you have to wade through the filter first.

Filter verbs work against us on both of these principles. Is a character “watching” more important than a character “approaching”? The inclusion of such implies that it is.

(But spoiler alert: it’s not.)

Writers instinctively filter as a way to pull readers into their characters’ heads, but ironically, it creates distance instead. Essentially, a reader for Sentence #3 is watching someone watch someone else. If we swap the verb structures, we can see exactly how superfluous the filter is:

And suddenly, no one cares about the observer. Why? Because any importance their observation carried was tied to sentence position, not to a greater semantic or pragmatic message.

If you write in 1st Person or 3rd Person Limited Omniscient, your character’s observations are built into the point of view. We know they see something because if they didn’t see it, it wouldn’t show up in the narration of events.

Filters, then, become redundant. Their elimination can tighten prose and shift focus to the more interesting action of the story. You can rewrite passages to eliminate filters, but removal of this barrier doesn’t have to be difficult.

Often, a more active verb lurks beyond the filter.

Here we have our filter with a more engaging participle in its compliment. If we ditch the filter, “twisting” gets elevated to the finite verb position:

And suddenly, that knot is twisting your insides too. A simple shift in tense-bearing verbs allows the reader to experience such action directly instead of getting a watered-down account.

Here the filter is the only verb (because “blurred” serves as an adjective). However, we do have indirect action packed into the noun, “flex.” So, the un-filtered version becomes

Which is far more dynamic than its original incarnation.

Some filters point to a different grammatical mood in their unfiltered form.

The combined filters in “she thought she saw” create an uncertainty, and that points to the Interrogative Mood. Un-filtered, this example turns into a question:

Was it? We don’t know. The reader gets to wonder alongside the focal character, drawing out tension in the scene.

Removing filters leads to a more immersive reading experience because it engages the reader directly with the action. They see and feel and experience alongside characters instead of processing events second-hand.

When Filtering Is Good

As with all our barrier objects, filter verbs function best when they have a witting purpose. They’re excellent in dialogue, when one character needs to communicate experiences to another. In narration, they allow moments of introspection, often necessary in character development and plot progression.

They allow, too, distance. There may come occasions in your story where you want to push your reader back a step. Filters very calmly, very cleanly accomplish this feat.

Particularly when used with restraint.

Up next: Expanded Verb Structures