Well, just one gift, actually. And I made it myself, and it’s not a cat sweater.

It is a writing tool extraordinaire (if I do say so myself), dedicated to my dear friend Jen and offered to all. I’ve worked on this thing off and on since May, and there’s a backstory that inspired it, but in the interest of brevity (too late), I’ll let the graphic speak for itself.

May you enjoy it, but never put it to practical use.

DISCLAIMER #1: I do not write modern romance. This is satire, and any resemblance to any existing modern romance heroine or tag line is purely coincidental. (That sometimes happens when you’re playing with clichés, haha.)

DISCLAIMER #2: This graphic is BIG, and I am not tech-savvy. I muddled over the best way to present it but decided just to toss it up on this post. Good luck. (Protip: Click on the picture to get at the larger version, Mom. It should open in a new screen.)

DISCLAIMER #3: I do have a PDF version, if anyone is silly enough to want a physical copy of this. Sized for A2 paper. (Closest American equivalent is 18″ x 24″.) It cost me $20 to get a draft copy, but the result was delightful. Uhh… leave a comment if you’re interested? 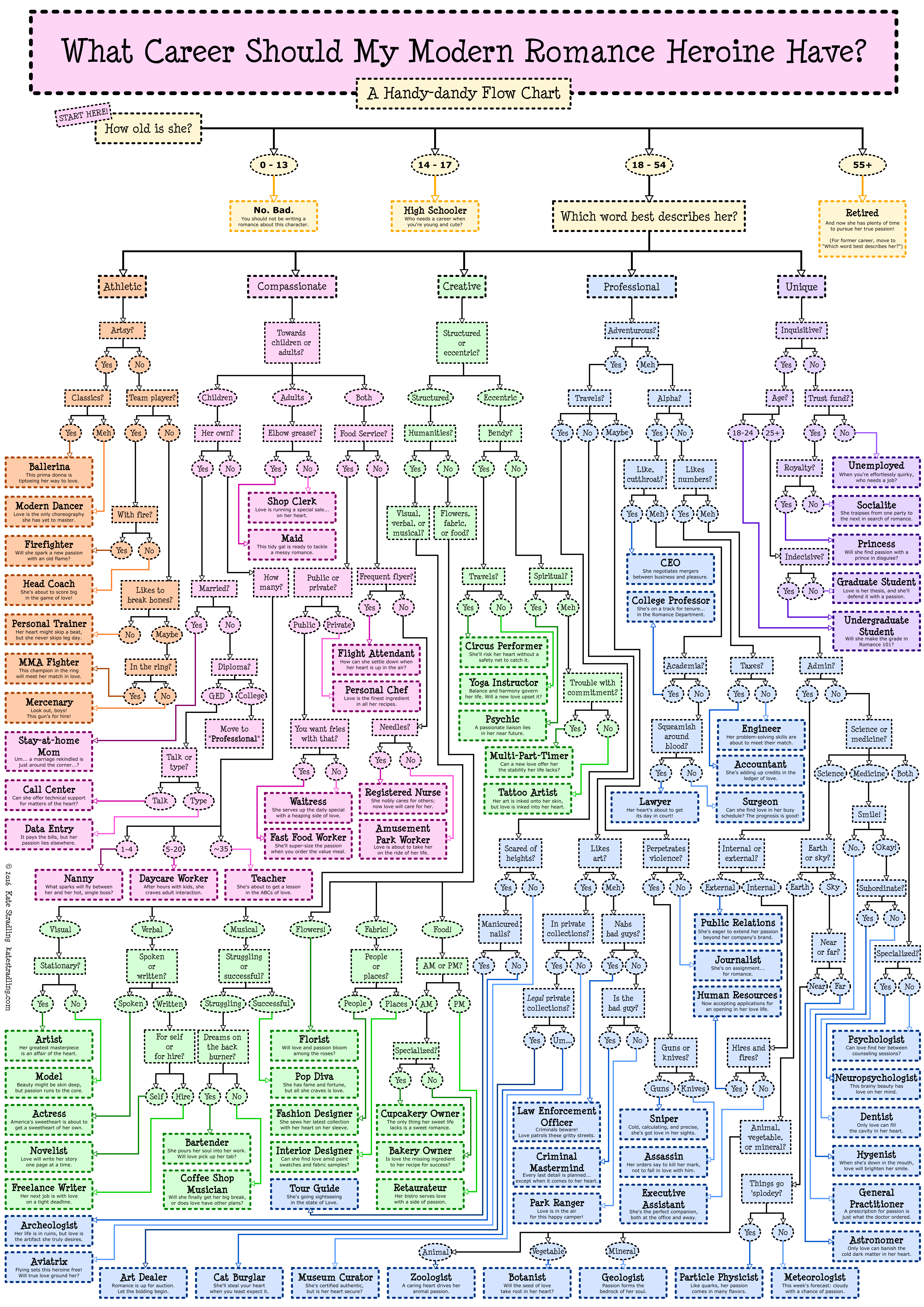 Over the course of human history, the greatest conflicts have revolved around the right to rule. “In the land of the blind, the one-eyed man is king,” as the saying goes: those with advantages in life will always claim they are better suited to lead, and perhaps they are.

But that doesn’t mean they should glide to the position without a fight.

The morphemes –archy and –cracy carry a meaning of “government” or “rule”; –archy is the Latin form, and –cracy is the Greek, and words containing one of these two units refer to a specific type of government. For fun and world-building purposes, I’ve compiled a list of terms.

There are also numeric combinations: pentarchy, hexarchy, heptarchy, and octarchy [penta– (Gr. “five”), hex– (Gr. “six”), hept– (Gr. “seven”), and oct– (Gr. “eight”)], for example. These terms refer to groups of five, six, seven, and eight allied states or governors and, presumably, any of the Greek numerical prefixes would work in this template. Why the Greek prefix gets tied to the Latin suffix is anyone’s guess, though.

(Just kidding. There’s a Greek cognate for –archy, so it’s all good.)

Not all forms of government include the –archy or –cracy suffix, of course. Here are some other lovely, government-related words to keep in mind.

Government has, from the beginning of time, been a social necessity. It’s telling to note, however, the number of synonyms that exist for dictator: tyrant, despot, autocrat, oppressor, usurper, fascist, authoritarian, totalitarian, and so forth.

Ultimately, power leads to corruption. Those who govern will always battle the allure of unrighteous dominion—if they don’t embrace it outright, that is.

I read a book last week with a whole cast of MarySues. I kid you not. Everyone was royalty, half-elf, full elf, an amazing fighter, horrendously accomplished/respected/feared despite their young age, dressed dashingly to the nines even in squalid circumstances, etc. The heroine MarySue-bested the hero when they crossed swords on their first encounter, and the hero was grudgingly impressed because he was, like, the Bestest Swordsman Evar!!1!1! His elf-prince sidekick had a nicely tragic backstory to make his alone-ness all the more poignant. The Lesser Sues either died nobly or received their glory moments so that the reader would know how omigosh speshul they were.

It was a riot. (And no, I’m not going to call out the book by name. That would be bad form.)

Basically, MarySue embodies the acme of ham-handed character development. Although she’s more common to fanfic and RPGs, she rears her head often enough in fiction to merit discussion. Everyone loves MarySue. Everyone readily sympathizes with her. Everyone knows that in the end, she will triumph and her cause will be vindicated. She is special, the exception to every rule, the outlier character with superficial flaws that are easily glossed over.

I’m guessing that at some point in our development, all writers are guilty of creating a MarySue—or a whole cast of MarySue variations. It stems from our natural desire for readers to love and sympathize with a character (or characters). Ironically, though, the more MarySue a character becomes, the less the reader is likely to connect. At some point, sooner rather than later, “amazing” becomes “absurd.”

Sorry to break the news. Your handsome prince-turned-highwayman who’s out for revenge against the wicked coward who murdered his father, and he’s only 18 but commands a whole crew of sycophants and has since he was 12, and they’re all unfailingly loyal to him because his cause is Just and True™ (except for that traitor-in-the-midst who is evil and self-serving and whose traitorous behavior no one ever saw coming because who could be so traitorous), who attracts the beautiful-and-contrary heroine with his dashingly noble behavior and draws her to his side despite him now being a horrible criminal (but he’s a noble criminal, you see), and their love is so destined because they are both awesomesauce with a side of angst? That guy is absurd.

I’m not trying to be harsh. Like I said, I think it’s a stage of creation that all authors pass through at some point or another. And if you’re at all worried that your favorite brain-child might be tipping over into MarySue territory, Springhole.net provides a fun and enlightening diagnostic:

Please note, this test has a very low tolerance for MarySue-ness. 5 – 16 points is the “very safe range” to be in. I took one of my early characters for a spin and was disheartened when she scored a 31 (“high-to-very high chance” of being a MarySue). But then out of curiosity, I tested a character from a fairly recent Big-5-published novel. Even leaving out the “author specific” questions (whether the character’s looks were patterned after the author’s; whether the author wanted to be the character or adopt the character, etc.), the score was 74.

And I felt marginally better—not because “My character is less MarySue than yours, lol!” but because I had mostly liked the second character. A few of the extra attributes got on my nerves, sure, but for the most part, I related to her and was interested in her story, MarySue or not.

I think that, particularly for writing fantasy, there will always be an element of MarySue, because MarySue is fantasy personified. I don’t have plans to overhaul my 31-scoring character, in other words. I like her the way she is for the world in which she lives. However, I might, on my next revision of her manuscript, highlight more of her human side, particularly the mistakes and poor choices that she makes.

There’s nothing I can do about her backstory, though. If she’s not a demon-princess-shapeshifter-dragon-elf-halfling-sorceress, the whole plot will fall apart.

If book sales in the past decade are any indication, there exists a significant faction of readers out there who view stalking, obsession, and controlling behavior as oh-so-sexy… as long as said behavior comes from a handsome leading man. Give him fish eyes and a jumble-toothed grin, and suddenly the heroine is a victim instead of an envied avatar.

As I said in my last post, this trend in literature is nothing new. That it persists is what I find so disheartening.

I’ll be blunt: if the hero lies, manipulates, stalks, coerces, entraps, or performs any other act from a known spectrum of creepy behavior, and especially if he does it for his own benefit (usually to gain power over the heroine), he’s no hero. Those traits aren’t characteristics of a brooding romantic. They are symptoms of a sociopath.

(The same goes for female characters, of course, but when such traits occur in women, the book immediately shifts over to its rightful genre, thriller, and everyone recognizes her for the crazy that she is.)

Sociopaths make for fascinating characters. They can drive a plot forward, provide compelling tension, create seemingly insurmountable obstacles. Their detached, rational thought process and meticulous intelligence can strike terror in a main character and the reader both. One might say that sociopaths make the very best of villains.

They make horrible love interests, though. Mostly because, from a normal perspective, they’re dangerous and emotionally destructive.

And yet, they keep getting cast in that role, where often their only positive traits are wealth and a handsome face. A prevailing social narrative right now idolizes intelligence and rational thought, characterized by career success and a calm, detached demeanor respectively. Smoldering stares are prized over affability any day of the week.

“Just because a character smolders a lot doesn’t make him a sociopath, Kate.” Yeah, okay. If he smolders a lot, can he also turn on the charm when he wants to? And maybe that makes the smoldering all right?

Because I’m a giver (and because I’m too lazy to paraphrase when I’d have to cite the sources anyway), I will here provide some resources on sociopaths. Click the following for links:

If you’re really ambitious, measure your favorite character on any one of these scales. Measure other characters. Create a character or two or five and plop them into a lovely world they can manipulate to their shriveled hearts’ content.

Just, if you’re not writing thrillers, don’t give any of them a love interest, mmkay?

(Unless it’s another sociopath, I mean. Voldemort/Bellatrix, anyone?).