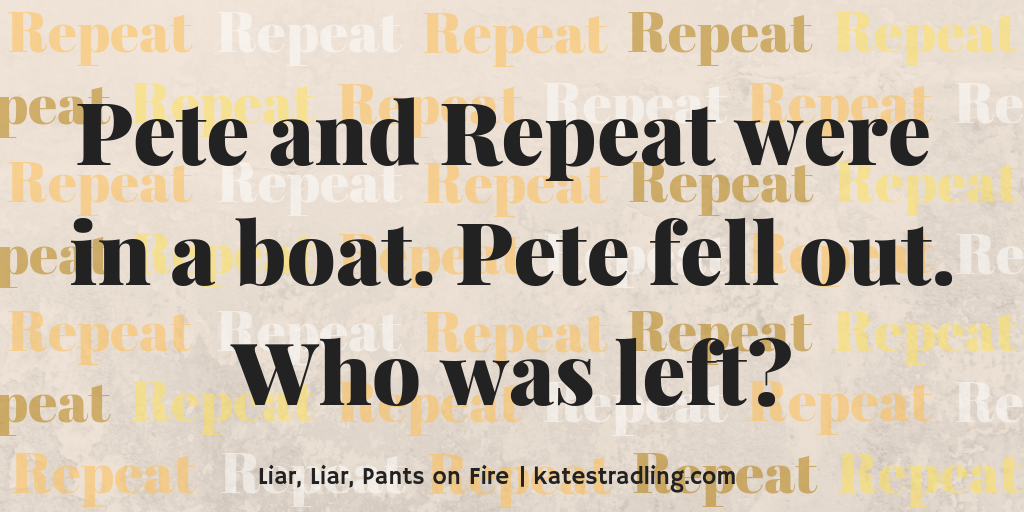 Next up in our patterns of deception: repetition.

One very basic tell for deception occurs when someone repeats a question verbatim:

Partial repetition indicates a desire to clarify. Repetition in full is a subconscious mechanism that occurs to delay answering, giving a split-second more for Person B to formulate a less-than-truthful response.

And there could be a totally legitimate reason for Person B to deflect. Person A could be a creep. They could simply have no right to know Person B’s schedule. Regardless, this deceptive tactic shows Person B’s reluctance to tell the truth.

Seasoned liars also take advantage of the Illusory Truth Effect. Research shows that the more often we hear something, the more likely we are to accept it as true, even if it has no basis in fact. This phenomenon falls in line with the infamous “repeat a lie often enough and it becomes the truth” quote often attributed to propagandist Joseph Goebbels.

Fake News™ on both sides of the political aisle relies on the Illusory Truth Effect to oil its gears. Lie, lie, repeat, repeat, repeat. Sooner rather than later people believe a story not because it’s true, but because they’ve heard it so many times that they accept it must be true. True Believers, when presented with evidence to the contrary, often retreat into the Fake but Accurate defense.

Ultimately, we each believe what we want to believe.

Repetition in writing falls under greater scrutiny than the spoken word. Its forms include the following:

­Example #1: using the same descriptors multiple times throughout a passage

Everything is tiny. Or blue. Everyone is standing or walking or turning. Or going back, turning back, backing up, looking back. Repetition of this type manifests when an author feels the need to describe every minute action that their characters take, every slight angling of the body, every tilt of the head, every twinkle of the eye.

And yes, I’m drumming in the fault with an overuse of “every.” Repetitive diction used on purpose drives home a point. By accident, it chafes like a bur stuck in your reader’s sock.

­Example #2: Repeating names instead of personal pronouns when the referent is clear

If you say that “Mary” is your favorite Jane Austen character, your listener may wonder if you’re talking about Mary Musgrove, Mary Crawford, or Mary Bennet. (They also might question your taste in characters; it seems that Jane wasn’t too fond of “Mary” in general, because all three of hers are sort of pests.)

Proper nouns only have meaning according to their surrounding context, and they can only be swapped for another Determiner or Determiner Phrase. So, for example, “Mary” can equal “she” (D) or “the woman” (DP), but not simply “woman” (N).

However, they are marked determiners, and any marked part of speech draws attention to itself if used more than necessary. The unmarked form, personal pronouns, blend in with the surrounding narrative unless their context (their referent) is missing. In which case they become marked.

John entered through a side door, laughing. He rubbed his hands together. “You’ll never guess what I just saw,” John said.

That last “John” is clunky, right? When we already know who a narrative refers to, the unmarked personal pronoun becomes the preferred determiner.

This type of narrative repetition includes the following:

The temptation to paraphrase or recap events often comes as part of the drafting process. Sometimes weeks, months, or even years can pass between when you write one scene and its follow-up, and you instinctively want to make sure that the reader remembers that earlier event so they’re not lost. However, in a total immersion reading situation, a reader can consume the whole book in 5-7 hours. It may have been as little as 10-15 minutes since they encountered that information. In general, they don’t need you to revisit it, and certainly not in great detail.

The following paragraph, taken from the first draft of an unpublished manuscript, illustrates some examples of repetition and paraphrase. (I have changed the character’s name, but nothing else.)

Mary knew she was a selfish creature—she had been for years. If there was anything life had taught her thus far, it was that she could only rely on herself, that no one else really cared whether she lived or died. That was an exaggeration, of course—her grandfather tried, but his hands were tied from so many directions, including his own ingrained beliefs. He had changed, she knew, and probably still was changing, but she only trusted him to a point nonetheless. She had been left to her own devices too many times and had come to realize that everything was much simpler if she assumed she would receive help from no external sources. So long as she kept that cynical outlook, she owed nothing to anyone else; as an added benefit, she was not tethered down by any sense of loyalty or obligation to help others.

There’s a lot that’s wrong with this excerpt, but I’ve highlighted instances of repetition, both exact and rhetorical.

Basically, this paragraph is roughly three times longer than it needs to be. The revised version reduces it from 149 words to only 46:

Mary had been a selfish creature for years, left to her own devices too often to rely on others and resentful when others tried to rely on her. This cynical outlook freed her from any sense of loyalty or obligation toward the rest of the world.

The revision condenses the many evidences of Mary’s selfishness into two sentences, ditches the narrative frame, and omits the details about her grandfather. We state simply what Mary is, why she is that way, and how it shapes her worldview.

The reader doesn’t care about the details of Mary’s selfishness, except in how that selfishness will drive her actions through the plot.

(And if you’re wondering why Grandpa got the narrative boot, it’s because the reader already knows he and Mary are on the outs from earlier in the story. There’s no need to repeat that detail here.)

Unwitting repetition gums up a story’s efficiency. Worst-case scenario, it drives a reader crazy and turns them off the book. If you’re wondering whether to keep or toss a repeat or paraphrase, ask yourself the following questions:

If you answer “yes” to all four, forge ahead. If not, revise.

Up next: Inauthentic Emotions