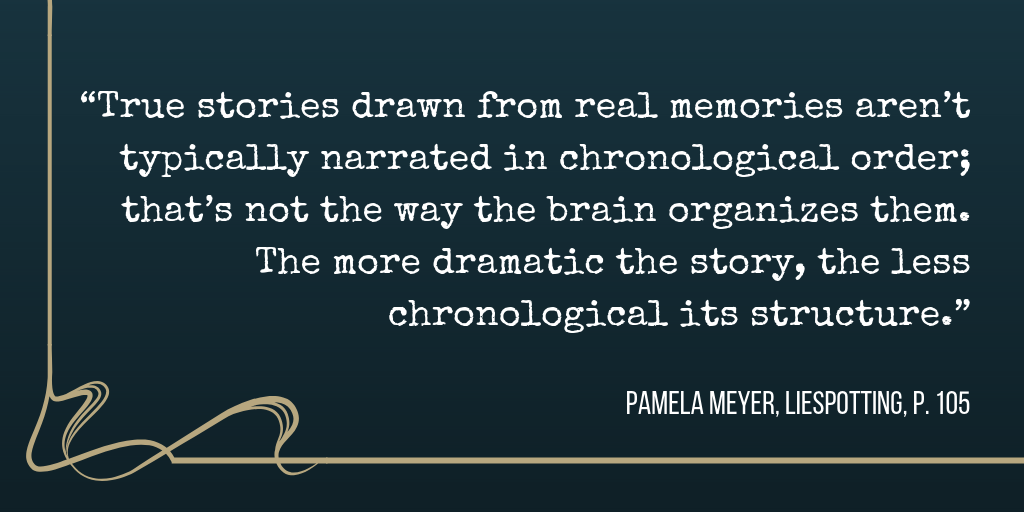 Emotions play a driving force in our actions and reactions. They’re also patently difficult to counterfeit.

Genuine emotions linger. Fake emotions fizzle. The liar can only pretend their strong feelings for so long.

Consider a wrongful accusation. An innocent person gets angry on instinct. They go on the offensive, presenting facts that prove their innocence with a fury that remains steady throughout. And they can hold a grudge afterwards, sometimes for years, sometimes even when they’ve made overtures toward forgiveness.

Wrongful accusations get us worked up, and they stick with us.

A liar, in contrast, may feign outrage to appear innocent, but their indignation only lasts as long as they need it to. Their language patterns are defensive. “How could you accuse me of such a thing? Don’t you know how much work and effort I’ve put into this?”

And once they feel they’ve proved themselves and/or shamed their accuser into silence, they return to magnanimous calm.

This pattern of false vs. true emotions follows through with other high-stakes life events. Genuine trauma, either mental or physical, often triggers depression, with rippling effects that require significant time and counseling for recovery. When someone fakes a trauma, they play to their audience for the moment but quickly forget or conveniently recover in the aftermath.

In her TED Talk, “How to Spot a Liar,” Pamela Meyer shows two clips comparing a false narrative to a truthful one. (Note/Warning: Video on that link starts at 14:46. Content includes vivid description of violence. The clips pertaining to this post finish at 16:39, but the whole talk is worth a listen.) The stark difference between the liar and the truth-teller underscores how deeply our emotions influence us, even years after an event occurs.

As it turns out, our emotions also govern how we tell stories: their structure, their focus, their completion.

False stories have a prologue and main event but typically skip the epilogue.

Think of the most emotionally charged events of your life. When you tell those stories, you don’t dwell on the scenery or the minutiae that happened around them.

Someone who gets robbed at gunpoint doesn’t start their story with how they woke up that morning. If you get a flat tire on the freeway, chances are you tell your friends, “I got a flat tire this afternoon.” Or, more emotionally, “I almost died today.” The newlywed who recounts their wedding probably doesn’t start with the long moment of introspection they had while staring into a mirror.

Our emotions help us interpret the happenings around us. The stronger the emotion, the more it influences us.

In Writing, inauthentic emotions show up when characters experience traumatic events but then everyone resets in the next scene so the plot can move forward.

Wounds have no lasting consequences. Betrayals are forgiven and/or forgotten. Character deaths are briefly mourned and then brushed aside.

Trauma should echo into subsequent scenes, in one form or another. This is not to say that characters should wallow in depressive misery when anything bad happens, but neither should they skim through events with shallow emotional investment. Even those who steel themselves to feel nothing in a traumatic aftermath will have a breaking point.

The Prologue/Main Event/Epilogue structure of truthful storytelling gives us a standard template to work with. Perhaps most importantly, the non-chronological nature of true stories reinforces why exposition and backstory are better left for later in the book. Likely, these elements are not the most emotional events in your characters’ lives.

But by that same token, if something in a character’s backstory emotionally drives their actions, it should get a reveal sooner rather than later. (And beware repeated references without actually naming the event. This falls under circumlocution, as discussed in my post on Indirect Discourse.)

As for the story structure itself, “Prologue”  and “Epilogue” don’t mean you need these formal, demarcated sections. A prologue, in this instance, would be the introductory material that flows into the main event.

“The education given to Flora Poste by her parents had been too expensive, too full of team sports, and too long.” ~Stella Gibbons, Cold Comfort Farm

“It was the egret, flying out of the lemon grove, that started it.” Mary Stewart, The Moon-Spinners

Each of these serves as a preamble, even though they fall in Chapter 1 of their respective works. They also represent examples of beginning-, middle-, and end-focused prologues.

Cold Comfort Farm starts at the beginning, with Flora’s life prior to the events of her story. We learn from that simple opening line that she does not value her education (or her parents, as we soon discover), that she despises team sports, and that she has a penchant for efficiency.

Flora has yet to contact the morbid relatives who will house her for the bulk of her tale. Instead, this introductory chapter highlights many of the absurd tropes that Gibbons’s delightful little satire is about to skewer. (Including the Mysterious Traumatic Backstory, haha).

One might, from reading the opening line of The Moon-Spinners, assume it also starts at the beginning. It has the word “started” in it, after all. However, our narrator, Nicola Ferris, has already arrived in Agios Georgios for her holiday. She backtracks to give the events that led her there, but that egret from the first line leads her up the mountain, where she stumbles upon a plot already deep in play.

Stewart could have easily begun with Nicola in Athens, in her vacation-planning phase. But, as Nicola so aptly says, the true adventure starts with the egret, so there begins the story too.

Daphne du Maurier’s iconic opening line introduces a narrator already far removed from the story she is about to relate. The rest of the chapter firmly establishes this, with Mr. and Mrs. de Winter living from hotel to hotel, forever trying to escape their traumatic past, and forever haunted by it.

Had Rebecca started at any other point than this, the whole dynamic of the novel would change. By beginning at the end, du Maurier creates an atmosphere of fatalistic dread for what is yet to come, despite many light-hearted moments throughout the book.

Each of these “prologues” reflects a driving emotion of the book: Flora’s cheerful efficiency, Nicola’s guileless curiosity, and Mrs. de Winter’s heartbreaking anxiety. These emotions carry through the main events. They influence not only how these characters react to their situations, but also how each author unfolds her story.

Epilogues serve a similar purpose, summarizing a novel’s emotional themes. Authors who choose abrupt or open endings leave their readers to process through those emotions alone.

Which, mind you, is a legitimate stylistic choice.

(As long as you use it wittingly.)

Up next: Too Much Information