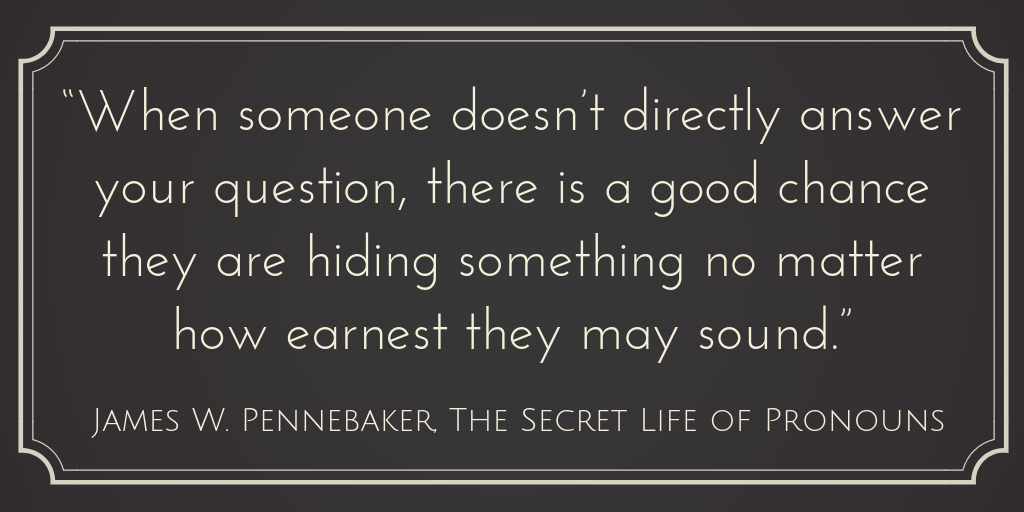 Indirect discourse is a dead giveaway that someone doesn’t want to speak the whole and ugly truth.

Patterns for indirect discourse include the following:

This common and oft-maligned structure acts as a hallmark of indirect speech. In passive voice, the lexical object of a transitive verb elevates into the subject position, and the subject removes either to a prepositional phrase headed with “by,” or to oblivion.

In layman’s terms, passive voice takes the focus off who did something and places it firmly on what occurred.

Liars cleave to this construct because it allows them to talk around their own culpability.

“The money was stolen last Thursday.”

It doesn’t matter who stole it, just that it was stolen, right? …Right?

Liars use fewer 1st person pronouns, and more 2nd and 3rd. This form of prevarication shares its source with use of passive voice. A liar doesn’t want you to focus on them and what they’re doing. They’d rather point your attention elsewhere, to what you and everyone else did.

A distanced narrative sounds more objective because it assumes a neutral point of view. It’s why scholarly papers largely avoided 1st person pronouns up until the last decade or so: researchers sought for that clinical tone that gave their work more gravitas. But in recent years, usage has shifted, to where “I” and “we” are not only accepted but encouraged in academic literature. There’s greater credibility in owning your research instead of attributing procedures and results to some unnamed arbiter.

Avoidance is a standard tactic to steer around the truth. Don’t like the topic? Pick a new one and hope your conversational partner doesn’t notice.

Except that most of us do notice. This tell, except when performed by the wiliest of prevaricators, sticks out like a tulip in a marigold patch. The liar who changes subjects relies on the politeness of their listener not to change it back.

As with real life patterns, passive voice crops up in writing when the narrative focuses more on the what than the who. Some clarifications:

This final point leads us to one of the ways to resolve passive voice: swap a passive verb for an active one, either an intransitive or transitive pair.

Passive and active verb pairs abound, their meanings related close enough for them to pass as rhetorical synonyms. This type of swap allows the passive subject to remain in its position of focus, but in a way that draws less attention.

The other obvious method to eliminate passive voice is to restore the active subject:

Passive voice is not grammatically wrong, but it is rhetorically weak, and weakness invites questions. Reducing its use can strengthen prose significantly.

Exhaustive exposition that talks around subjects instead of addressing them

Also known as circumlocution, this brand of indirect discourse points fingers at itself with how desperately it avoids subjects. Consider

The danger of these examples lies in their likelihood to annoy a savvy audience. Avoiding a subject brings more attention to it. Treating it with ambiguity, however, leaves it open for the reader to interpret, and in many instances to assume that the narrator has addressed and resolved it.

I have blogged about red herrings before, in a far more entertaining post than this one. Long story short, they can be a huge asset or a huge stumbling block.

A while back my mom was in a book club that insisted on reading through an entire series of cozy murder mysteries. She said she always knew who the killer was because early on, the author would introduce a character who then faded away for the middle of the plot. The amateur sleuth would pursue instead a blatant red herring, and when that lead petered out, SURPRISE! The killer was that seemingly innocuous wallflower from the start.

Only, when it happens every single time over the course of a whole series, it’s not much of a surprise.

There is an art to red herrings. Namely, they must be believable. If they’re too over-the-top—trying too hard to draw attention to themselves, as it were—they lose their plot value.

Amateur sleuths flock to red herrings like seagulls to a trash barge. The trick is not for the sleuth to assume another character’s guilt, but for the reader to assume it. And that requires crafty plotting indeed.

Narrators are guilty of indirect discourse when they avoid addressing questions that the reader has, or put off admitting things the reader has already figured out.

Basically, if you talk around an issue too long, you point fingers at your own deception.

Previous: Contractions or the Lack Thereof