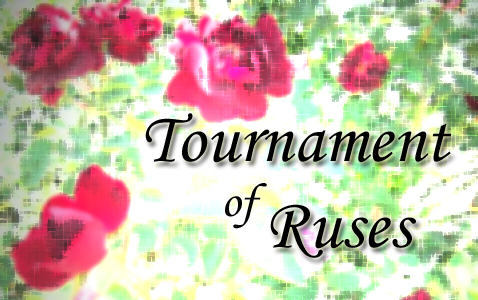 “That’s the ending? You can’t just end it there!”

These are the words my mother uttered when she finished reading my first draft of Kingdom of Ruses. It has a sort of open ending, I’ll admit, but intentionally so. The major plot points are resolved, the hero has triumphed, and all is well, so the story ends. (Sorry for the spoilers, all ye who have not read it: Surprise! It’s not a tragedy!)

You see, I have this thing about people beating an idea to death and then continuing to squeeze the battered pulp for any last drops of mild entertainment: I don’t like it. If something is predictable, I feel like it doesn’t really need to be explained in great detail. Plus, for some situations, there’s more power in my readers’ imaginations to picture what happens next than there is in my writing it. Kingdom is a self-contained novel; it was designed that way from the start, and I stand by my ending, regardless of complaints. (My mom’s not the only one—I’d say I get probably a 30/70 split on the “hate it/love it” reaction.)

So when my mother, the very first person to read the manuscript, complained, I immediately replied, “Oh, come on! You know exactly what happens next!”

And at the same time that she was admitting, “Well, yeah, but—,” this little voice in the back of my mind piped up to say,

There’s this deviant side of my brain that likes to meddle with preconceived expectations. The instant that thought entered my mind, I suddenly knew that she didn’t know what came next. Nobody knew what came next, because I hadn’t written it yet. And a new plot was born, just like that.

And so, without further ado, my 2014 project: Tournament of Ruses, a Novel and Mostly Unnecessary Sequel.

Flora Dalton wanted nothing more than a quiet life in the countryside of Lenore, but her father’s promotion to the Parliament of Lords has uprooted her and planted her smack in the middle of a mess. Not only must she adjust to a new home, a new city, and a new circle of friends, but she also gets to endure a whole country gone mad with excitement: the Eternal Prince of Lenore—their famed and fabled protector—has decided at long last to take a consort!

Rumor says he’s going to marry the Prime Minister’s daughter, Viola Moreland, but the lords have petitioned him to consider each of their daughters in turn, and that includes poor Flora. Against her wishes she must navigate a sea of scheming females in a ridiculous tournament of feminine graces, all while deathly shadows encroach upon her doorstep. For even though most everyone is fixated on the Eternal Prince’s love life, there’s something much more sinister afoot in Lenore, and Flora happens to be at the very heart of it.

I finished the first draft in 2011. I published Kingdom of Ruses in 2012 and had a good internal chuckle every time someone groused about its ending. (I here apologize to the ~30% and admit my behavior was ungenerous.) So, to all who complained, my mother included, you are hereby vindicated. And to all who liked the ending just as it was, so are you. Tournament of Ruses is designed to be self-contained as well. Look for it sometime around June-ish.