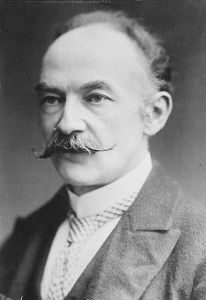 I read Tess of the d’Urbervilles at the ripe young age of eighteen. For fun. Just after I’d finished reading Henry Fielding’s Tom Jones (which is a side-splitting comedy). I assumed that it had a happy ending.

Why would I assume that? First, because one of my high school English teachers had said it was her favorite book (who likes sad endings?); second, because A&E had just made a TV adaptation of it (why would they go to such effort for a crappy ending?); third, because all the English literature I’d read before this ended happily (granted, it was all Neo-Classical, Romantic, or early Victorian, but still!), and fourth, because I was a naïve eighteen-year-old (mea culpa).

Did I mention I read it in one sitting?

So there I was, in a marathon reading, immersed in Tess’s life as she went from one misfortune to the next, and all the while believing that she’d remain stalwart and that everything would turn out right in the end.

Then I reached the final Phase of the book, and everything was upside-down and backward, and it all fell to pieces like a turd in a butter churn. (That analogy doesn’t make sense to you? Neither did the last phase of the book to me.) I finished in the dead of night; my roommates were all in bed asleep; it was snowing outside, and somehow I wound up walking up and down the street barefoot as I tried to process what had just happened to me. And in the end, I determined that the influence that an author holds over his or her audience is something sacred and not to be taken lightly or abused.

LOL. I was an English major. I’ll take “Promises Impossible to Keep” for $500, Alex.

So, Far from the Madding Crowd came next, by assignment. I’ll be honest. It’s not horrible, but I read it with the detached curiosity of a spectator watching people make inane decisions. I recall not particularly liking the main character or the object of his adoration. I didn’t connect with either of them. If I had to equate this book to a meal, I’d say it was like eating cardboard for breakfast. It won’t kill you, but you probably don’t want to do it on purpose.

Then, The Mayor of Casterbridge: I actually kind of liked this one. It’s supposed to be Hardy’s first tragedy, but the “tragic character” is such an a-hole that he deserves exactly what’s coming to him. I did read with trepidation, as there are a few likable characters, but things ended well for them, as I recall. In fact, I was mystified as to why it was considered a tragedy, because the good ended good and the bad ended badly. All in all, this is probably my favorite of his books that I’ve read. That’s not saying much, though, as I’m not likely ever to read it again.

Finally, Jude the Obscure, assigned for a lit-and-film class. Please. Just gouge my eyes out with a dull spoon if anyone ever requires me to read this book again. “Oh! The plight of the working-class man!” Yeah, that’s in there, but for me it’s more about two characters who make stupid, short-sighted decisions on basically everything, and then act all victimized when things don’t go their way. And for the love of Pete, would someone please shove a sock into Sue’s mouth? “Hello, my new neighbors! Just thought you should know that my cousin and I aren’t married but we have kids and don’t you dare expect us to conform to your social mores but you need to treat us nice instead of shunning us like everyone else always does when I tell them that we’re living in sin.” I mean, you want to break social rules? Fine. Don’t broadcast it, or else don’t get butt-hurt when society reacts unfavorably. And for Heaven’s sake, DON’T TELL THE MOODY STEP-KID THAT YOU KEEP GETTING KICKED FROM PLACE TO PLACE BECAUSE THERE ARE TOO MANY OF YOU!!! *strangles* (Literally. Ugh.)

Aside from those four novels, I’ve read a sampling of Hardy’s poetry. I won’t complain about it. I’m not a monster.

I guess, when it comes right down to it, I just don’t get the guy. He’s a fatalist, so everything’s all about Fate getting you in the end and people not really having power over their outcomes, but as a reader, I always saw other choices for his characters, and it was frustrating to me. They’re all victims—of circumstance, of society, of consequences to their own foolish actions—and honestly, I could never figure out where the huge fatalist chip-on-the-shoulder originated. I mean, Hardy had his life-challenges, I suppose, but so does everyone.

He wanted to be an architect, but it didn’t work out, so he turned to writing. He preferred poetry, but that didn’t sell, so he went to novels. He was in love with his first wife, but in later years he flaunted his adulterous affairs in her face and was completely devastated when, one morning after breakfast, she went upstairs to her room and died. She hadn’t even told him she was sick!

Then he married his much-younger secretary and lived a while longer, pining after the dead first wife (which must have been delightful for the second). It’s almost like he could never be happy with his present circumstances because everything that brought him there hadn’t gone just the way he wanted.

I don’t think he knew what he wanted.

I know what I wanted when I read his books, though. I wanted characters that didn’t fly off the deep end whenever some problem presented itself. “What’s that, honey? You were once raped and had a baby that died, and you decided to put off telling me until the night of our wedding? I think I’m going to need some time to myself to think about this IN FREAKING SOUTH AMERICA. Don’t expect any letters or ETAs for my return or anything ’cause that would be way too normal and rational.”

And that brings us back to Tess. I know there are people who love this book, but I. Just. Don’t. Get. It. Maybe it’s because I read it for “fun” instead of on assignment for a feminist lit class. How it’s feminist lit, though, is beyond me. A misogynist writes a novel where the heroine willingly returns to the arms of her rapist and, in the end, is totally replaceable. “Take Liza-Lu, Angel! She’s just like me, but not tainted!” And what’s the final scene? Angel walking away hand-in-hand with freaking Liza-Lu! Because girls are objects and if one gets executed for stabbing her lover in the heart, there’s always another waiting in the wings to take her place! Balderdash. (And a pox and pestilence on you, Angel. You were a complete jackass.)

But, well, I have to give Hardy his props, too. The very fact that he and his characters alike can get me so riled up is to his credit. I’ll admit that my criticism is mostly Reader-Response and allow that others may love his work and worship the ground where he’s buried (Westminster Abbey, most of him—I’ve seen the grave and maybe spat upon it).

And that first lesson I learned from him, at the end of Tess, I hold very close to my heart. I take my power as an author seriously—maybe a little too seriously—thanks to Thomas Hardy. May I someday write as boldly, but with a bit more sense.