Now that we’ve explored the Cooperative Principle and how to break it, we turn our attention back to our three layers of dialogue. Breaking the CP will look different on each of these layers.

Some breaks are good and can drive the plot, while others should be avoided at all costs. We’ll examine these by type of break and layer of dialogue. 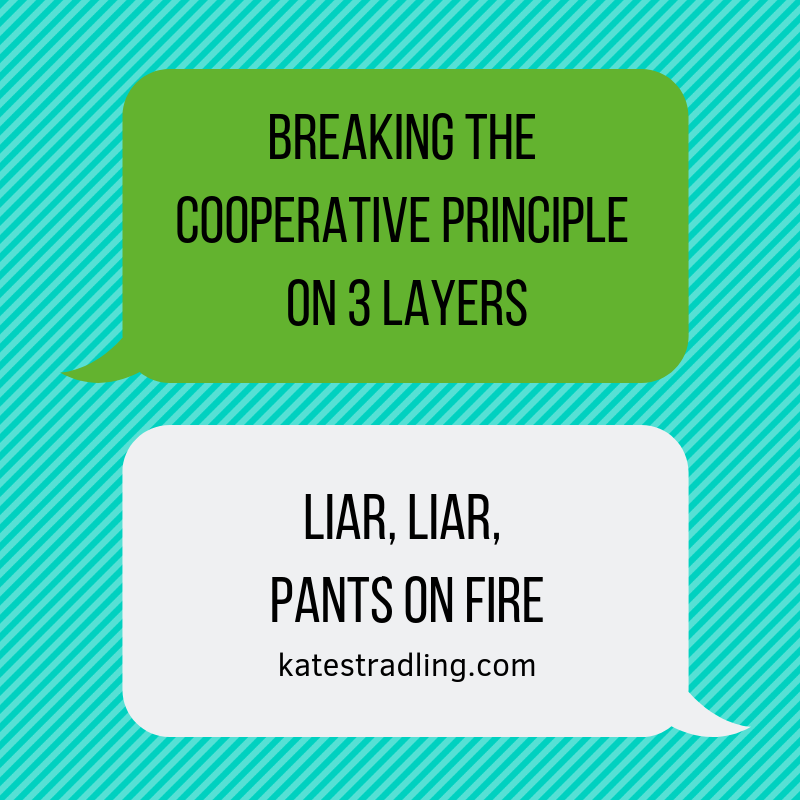 As discussed in our case study of Miss Bates, unintentional violations on this layer can have many forms. Characters who unintentionally violate the CP may do the following:

The only item on this list that is possibly undesirable is the fourth bullet point, particularly when missing pronoun referents lead to conflict. (Not to point fingers, but this happens an awful lot in the romance genre…)

In the real world, we are keyed to tie pronouns to their referents. When the referent is missing, there’s usually a double-check, “Sorry, who are we talking about?” or something similar. Pronouns only have meaning in their context, so this is one area that we instinctively clarify when there’s any ambiguity.

In a perfect world, we would never see a narrator breaking the CP in this manner. Unfortunately, we don’t live in a perfect world. Unintentional violations from the narrator include the following:

These types of breaks frustrate a reader at best. At worst, they drive the reader away from the book entirely and can generate ill will and scathing reviews.

The narrator should not commit unintentional violations of the Cooperative Principle.

If the narrator should not commit these types of violations, it’s doubly so for the author. Breaking the CP in this way on the Author to Audience layer of dialogue includes the following:

Unintentional violations on this layer break verisimilitude with the audience because they are mistakes in the very mechanics of a story.

Intentional violations on this layer of dialogue can drive a conflict. Characters breaking the CP in this manner might

The reader might or might not recognize that a violation occurs, but at some point, it should come out. It can be a strong reveal or a satisfying payoff. Or, it can be a detail that lies dormant, waiting for the canny reader to ferret it out from the other clues around it.

This type of break signals an unreliable narrator, easier done in 1st Person, but a possibility for 3rd as well. Narrators intentionally violate the CP when they

Because the narrator knows they’re violating the CP, the reader shouldn’t realize in the moment. Otherwise, the violation becomes a clumsy attempt at storytelling rather than an authentic, immersive tool.

The author SHOULD NOT intentionally violate the Cooperative Principle. Violations on this layer of dialogue include

What do I mean by “subtly trolling”? This happens when the author sees their audience not as partners in creation, or even as fellow humans, but merely as a means to a paycheck. The recent book-stuffing epidemic on KDP, for example, violated cooperation because readers often didn’t know they were helping those authors commit fraud.

Author-to-audience violations happen outside the narrative of the book. When discovered, they are a rude awakening to those who were duped.

We’re back in “desirable” territory in breaking the CP. Characters who flout are the pride and joy of readers everywhere. They

Flouting on this layer amounts to wonderful exchanges, where alternate meanings create multifaceted conversation. It’s the antagonistic flirtation between reluctant lovers and the battle of wits between rivals.

Everyone loves a good character-to-character flout.

On this layer, breaking the CP in the manner takes a more literary turn. Narrators who flout the Cooperative Principle

The reader knows there’s more than what they’re receiving, but the narrator doesn’t elaborate at that time (or ever, in some cases).

The author who flouts on this layer of dialogue shows contempt for their audience. This is an author who

This is the author who lists their book with keywords that don’t apply, or who claims a genre they’re not remotely writing. It’s the erotica listed as a clean read, or vice versa. The audience comes to the table expecting one thing and gets slapped in the face with another.

For funsies, I’m including how to opt out on the three layers, but breaking the CP in this manner is pretty basic.

When characters snub, give the silent treatment, or avoid encounters with other characters, they are opting out. This can add a fun dynamic to a scene (or to the novel as a whole), but beware falling into the trope of “a single conversation could have prevented disaster.”

If your characters are opting out, they should have solid reasons for so doing, none of this namby-pamby “can’t talk to that person because [contrived excuse].”

The narrator opts out when they stop telling the story. (Surprise!) Don’t like a cliffhanger ending? Too bad.

DO NOT WANT, for either of these.

Up next: The Misdirection of Agatha Christie