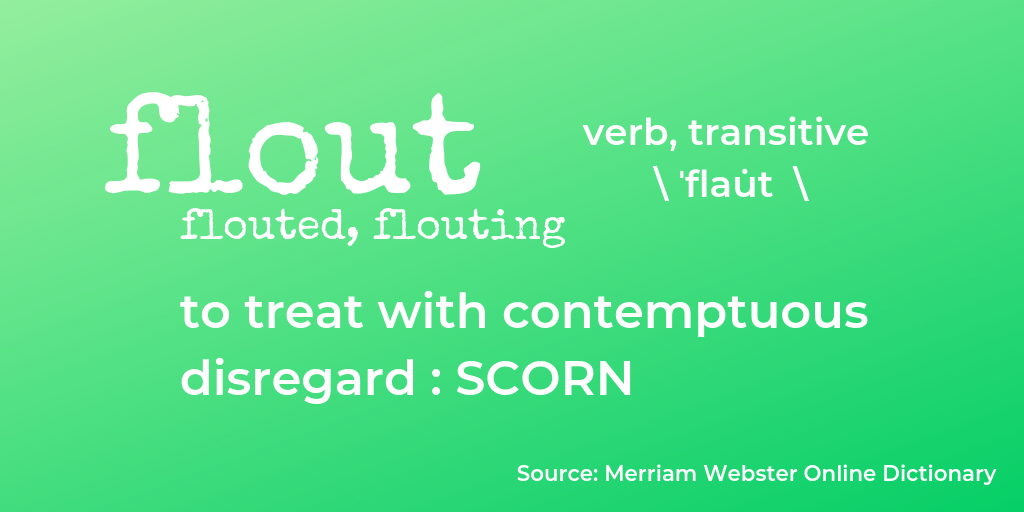 not to be confused with “flaunt”

Although H. P. Grice’s Cooperative Principle provides lovely guidelines for how to accomplish good communication, for writers, its real value lies in breaking it. We all inherently know how to be non-cooperative, but we might not recognize the dynamics at play.

Violating and flouting maintain a veneer of cooperation even though they involve breaking one or more of Grice’s maxims (quantity, quality, manner, and relevance). Opting out is blatantly non-cooperative.

This type of break occurs when one conversational participant doesn’t recognize the non-cooperation in action. Thus, there are two types of violations a speaker can commit:

We violate the Cooperative Principle on a daily basis, in one form or another. It can be malicious or benign. Sometimes, it’s unavoidable.

This type of break occurs when a speaker openly defies a maxim so that the hearer understands there’s an alternate meaning. ­Sarcasm, jest, double-entendres, language play, and gatekeeping can all fall into the category of flouting.

We generally associate abrasive personalities with this type of non-cooperation. These are speakers who don’t tell us what we want to hear, who spout bald-faced lies to test our gullibility, who use obscure language as a barrier.

They are also the jesters and the sages, two archetypes that circle one another. Flouting often requires wit and a healthy dose of hubris. It’s a great way to alienate others by making them feel stupid, foolish, or out of the loop.

It is a defensive language pattern as well. We flout when we want people to back off, to leave us alone, or to shut up. Flouting can be aggressive—a warning for its recipient to seek conversation elsewhere—or it can be playful, a challenge to engage in deeper meanings.

But, it can also miss its mark if the recipient refuses to recognize the flout and treats the conversation as bona fide. (Which can be a type of retaliatory flout, haha.)

This type of break manifests when someone outright refuses cooperation so that no conversation can happen. For example,

Even though there’s no exchange of words, communication still occurs. Opting out can convey displeasure, disdain, contempt, and/or rejection. It is the last refuge of someone who is overwhelmed by another person’s communicative style. It can be passive-aggressive, or an amazing power play.

My favorite example of opting out comes from the life of Jesus Christ, in Luke 23:8-9 (KJV). When under condemnation and brought before Herod for questioning, the Savior says nothing. Ultimately Herod sends him away mocked and belittled, but with his own desires left unfulfilled.

This example shows that breaking the CP in this manner doesn’t have to be derisive or mean-spirited. Sometimes, the most effective conversation is no conversation at all.

Breaking and Observing the CP: A Conversational Contradiction

Cooperation is a malleable principle. Thanks to the many layers of communication, it is possible to keep and break it at the same time.

Example A: Inside Jokes

Inside jokes can be both cooperative and non-cooperative if the conversation has multiple participants. In one fell swoop, an inside joke can accomplish the following:

Insides jokes are a form of code-switching, and codes are inherently cooperative and non-cooperative, depending on whether the listener is meant to understand or to be excluded.

In this same category, Easter eggs and other hidden messages create a type of layered cooperation that unfolds with increased familiarity. The new or casual fan doesn’t know they’re missing out, but as they delve deeper into the source material, they discover these extra gems.

Metaphors, too, might fall under this cooperative/non-cooperative dichotomy. They carry surface meaning that can be apparent or obscure. If the listener doesn’t recognize there’s a metaphor at all, it becomes a violation. If they know they’re missing the true meaning and the speaker refuses to explain, the metaphor becomes a flout.

For extended metaphors like allegories, the surface story holds one layer of meaning easily accessed (cooperative), but the listener must delve into symbolism to arrive at the deeper, intended message. In this, the listener chooses their level of cooperation, whether to accept the overt message as-is or to explore other avenues of meaning.

A listener who closes their mind to metaphorical interpretations, then, becomes non-cooperative in their own right.

Ultimately, we’re always communicating something. Non-cooperative conversation is a powerful tool to influence and manipulate. From outright lies to subtle details to silence, it can shape how people perceive others and the world around them.

Where writing is concerned, non-cooperation is a driving narrative force. We’ll explore one such example in the next post.

Up next: Case Study: Miss Bates of Jane Austen’s Emma