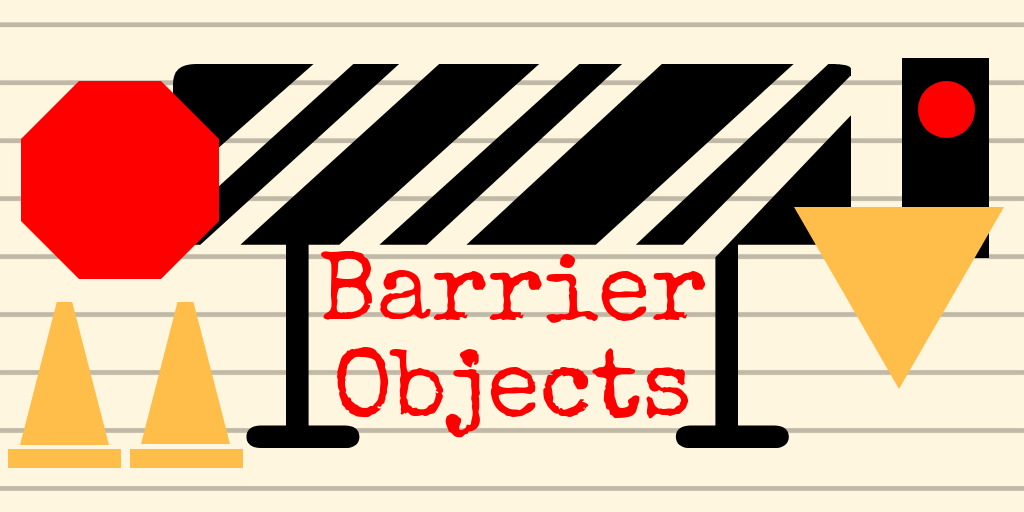 This section of the Liar, Liar blog series explores Barrier Objects, a term that refers to a non-verbal cue for deception. “Non-verbal?” you might ask. “How does that apply to the written word?”

But the pattern transfers nicely to language structure. Our goal is that our writing itself does not become a barrier between author and audience. Hence, the Barrier Objects sequence will be structure-heavy.

(Syntax lovers, rejoice! Everyone else, despair!)

In the realms of lie detection, a “barrier object” is any physical object that liars unwittingly place between themselves and their listener. This subconscious defense can take any number of forms:

The object, regardless of what it is, gives the liar a subtle sense of greater security. Sometimes it positions them for easier escape.

The psychology that drives this behavior suggests that liars instinctively seek to distance themselves from their recipients. They put up defensive walls to protect against detection.

However, if the barrier has a purpose, it no longer serves as a tell for deceit.

For example, if you’re talking to a friend and she puts her purse on the table between you, but then she proceeds to rummage through it to give you the $20 she owes you, there’s a legitimate reason for the barrier, and its placement doesn’t indicate a possible lie. A teacher who stands behind a podium might need that surface to hold lecture notes, or might wish to ensure that everyone in the class has a good view of the presentation.

These are conscious choices, not subconscious defenses.

Literary barrier objects, then, are defensive frames or structures the author unwittingly puts between their reader and the action taking place. They can include but are not limited to the following:

The posts that follow will highlight each of these in more depth.

As we discuss literary barrier objects, bear in mind that if you are using them wittingly, they have a place in your narrative. There’s nothing inherently wrong with any grammatical structure, and we don’t forbid rhetorical frames. In that vein, this section of the series is descriptive rather than prescriptive.

(I intend the whole Liar, Liar series to be descriptive rather than prescriptive, but this sequence particularly so.)

Up next: 3rd Observational Point of View