So in my pursuit of a productive year, I set myself some project deadlines and homed in on the first of the bunch. I’m happy to report that Goldmayne: A Fairy Tale has transferred over to my imprint. The updated ebook and paperback are both available.

The book received what I’m calling a typesetter’s edit. I.e., if a line or paragraph didn’t space itself well on the page I took the liberty of deleting a conversational tag or adverb. Sorry, not sorry. (There’s also a single line of dialogue that changed, primarily because it introduced a secondary context that wasn’t appropriate for the character speaking it, but I digress.)

The paperback interior is a VAST improvement over its earlier incarnation, if only in ease of readability. Typesetting guidelines put a boundary of 10 – 12 points for main body text. The old Goldmayne was in 10-point Garamond, because the book is ~122K words long. (My longest published work. Surprised?) Technically, that typeset met the prescribed boundaries, but the text was tiny, and I didn’t know at the time that Not All Garamonds Are Created Equal.

The new typeset is in 11-point Charter, with no hazards of eyestrain to be seen. It is lovely. It is also roughly a hundred pages longer, even though the text is about a thousand words shorter. (A prime example for why word count is the most accurate measure for the length of a book; page count is variable, depending on the set.) 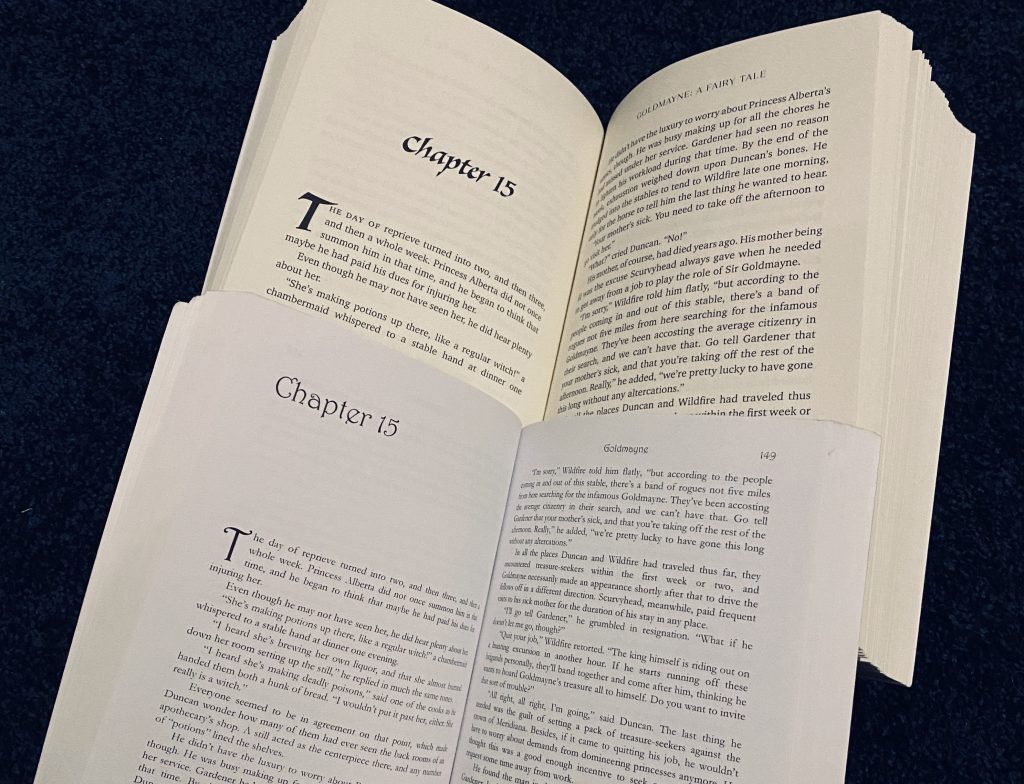 Old in front, new behind; what a difference a font can make!

The ebook got a reformat in Vellum, for a nicer, cleaner file. It just looks more professional all around.

And some extra good news? For this update, I kept track of any actual “quality” corrections I came across. The missing word in Chapter 16. An incorrect homophone in Chapter 2 (!). A couple of misspellings and some inconsistent usage (drily vs. dryly, for example). I finally gave up on “intransience” and replaced it with “permanence,” and I made a universal correction of “honed in on” to “homed in on.”

Which, to be fair, I’m still a little salty about. More on that below.

Long story short (too late), after I republished, I sent that list of quality changes to Amazon, and they have deemed this a “major update.” Meaning, if you previously bought this ebook, you should be getting an email that there’s a new version available. Whether you get the email or not, you can access the update in the Manage Content and Devices section of your Amazon account, if you so desire to have it.

And now, a usage aside.

Honed in on vs. Homed in on

In my ten years of publishing, no one has ever called me out for using “honed” where it was supposed to be “homed.” I am, quite frankly, shocked and disappointed in all of you.

I discovered this usage argument a couple years back and was dismayed more than I can here express. The prescriptive rule states that “home in on” is correct and “hone in on” is an erroneous usage that has wormed its way into vernacular speech. “‘Hone’ refers to sharpening things! It has nothing to do with visual focus!” quoth the naysayers.

But here’s the thing.

My brain had a marked semantic difference between the pair of phrases. For my idiosyncratic usage “honed in on” denoted a sharpening of focus from across a distance, like a camera lens zooming in on its subject from afar. “Homed in on” implied movement toward that subject, like a homing missile closing in on its target. Basically, I had learned the “wrong” phrase as a separate semantic unit.

You guys, I get called out on the silliest things. Like, there are readers, bless their hearts, who delight in finding any little error they can (or perceived error, because they’re not always right, lol). This one would have been easy pickings. WHY HAS NO ONE EVER HOMED IN ON IT?

Anyway, after reflecting on the misalignment between my internal lexicon and the mainstream prescriptivism, this is an instance where I decided to capitulate. I have duly retrained my brain to save “hone” for sharpening tools or wits or talents, because it’s a good word and I don’t want it dragged through the mud any more than it already has been.

Thus, I’ve edited its misuse out of Goldmayne and the first two Annals of Altair. It’s still in the Ruses books and The Legendary Inge. (I mean, maybe. I haven’t actually checked, but I liked the phrase, so I’m assuming I used it on the regular.) Timeline-wise, I think I discovered the discrepancy during my drafting of Namesake, but if anyone comes across it there, feel free to snark about it. We can both have a good laugh.

For the time being, I’ve set my whole website to shut off comment sections after 14 days. Too many Russian bots were bypassing my discussion filters, and I got tired of cleaning them out of my moderation queue. I’ll revisit this in a few months, but for now, if you want to comment, strike while the iron is hot.

(Unless you’re a bot, in which case, kindly take your shady pharmacy links elsewhere, please and thank you. Why you gotta ruin everything for everyone else, huh?)

2 Responses to Homed in on a Book Update