Discipline in the Year of Hindsight 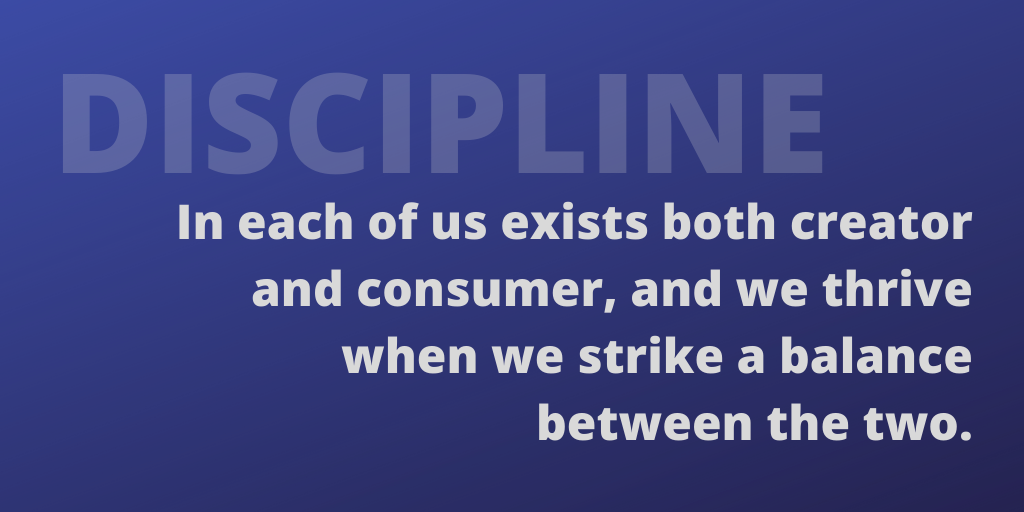 At the beginning of the month, people on my social media feeds started announcing their word of the year. I’ve never done that lovely practice, but it got me thinking: “If I were to pick one word that embodied my hopes for 2020, what would it be?”

Ever so softly, the vast ether whispered back, “Discipline.”

If there’s one thing I have lacked throughout my life, it’s discipline. In large part, my body has been a convenient vehicle to get my brain from one place to another. And since my brain’s favorite “location” is its daydream-du-jour…

Yeah. Exercise, sleep, and meals all take a back burner to whatever thought pattern I’m engaged in. I mean, I get to them eventually, but they’re not scheduled or anything.

Still, as much as I lack discipline, I idealize the concept as well.

Discipline sounds austere, like a schoolmarm with a critical eye and a ready ruler. However, it also exudes wisdom, like an ancient sage who has mastered body and soul.

The word shares its root with “disciple,” both of them coming from the Latin discipulus, “pupil/student.” Earliest English usage had to do with the “punishment” sense of discipline, but as an outward sign of seeking self-control. People would discipline in order to invoke obedience to a certain discipline.

Thus the word speaks to a broadening of the mind through strict adherence to a study or process.

One who has discipline is learning and growing. They understand and honor boundaries, physical, mental, spiritual, and emotional.

And ultimately, when I considered making it my 2020 theme, it begged the question, of what disciplines am I a student, and how well does my self-discipline reflect that?

In my ideal, I’m a disciple of writing. In reality, I’m more accurately a disciple of YouTube. Much as I love daydreaming about scenes and characters and plots, the process of connecting the dots and developing all of those in a believable (or at least passable) manner is HARD WORK. It’s so much easier to pull up social media and see what their algorithm has to feed me.

So, in my quest to find self-discipline, I took a hiatus from the internet.

Last week, I had about four approved websites I was allowed to visit. Two of them were dictionaries. It was lovely and, yes, oddly liberating to say, “No, I can’t go there. I’m not doing that today.”

And what was the effect?

First and foremost, I got to bed roughly 2 hours earlier most nights. I had nothing to do in the evenings, so why not sleep?

Second, I found time to exercise (four days and a total of 150 minutes, up from zero the preceding week).

Work-wise, I re-typeset Goldmayne for its transfer over to Eulalia Skye. There’s a few tweaks left, but the book is basically ready for its cover. (And it’s going to be a fat book. 474 pages. Yikes. But the original typeset was in 10-point Garamond, and I’m not playing that space-saving game anymore.)

I also wrote about 1K words on Eidolon. Still wading through the weeds on how to connect all my plot-points there, but I ain’t gonna sneeze at what little progress I can make.

Long story short: internet bad, discipline good. So, for now, I’ll be keeping my online time to a minimum.

(But we loves it, precious, we does!)

For Discipline We Strive

In each of us exists both creator and consumer. We work, and we play, and we thrive when we strike a balance between the two. Right now, I need that balance.

Wish me luck. And for those who have also chosen a 2020 word, good luck to you!