Hopefully You’re Not Offended by This 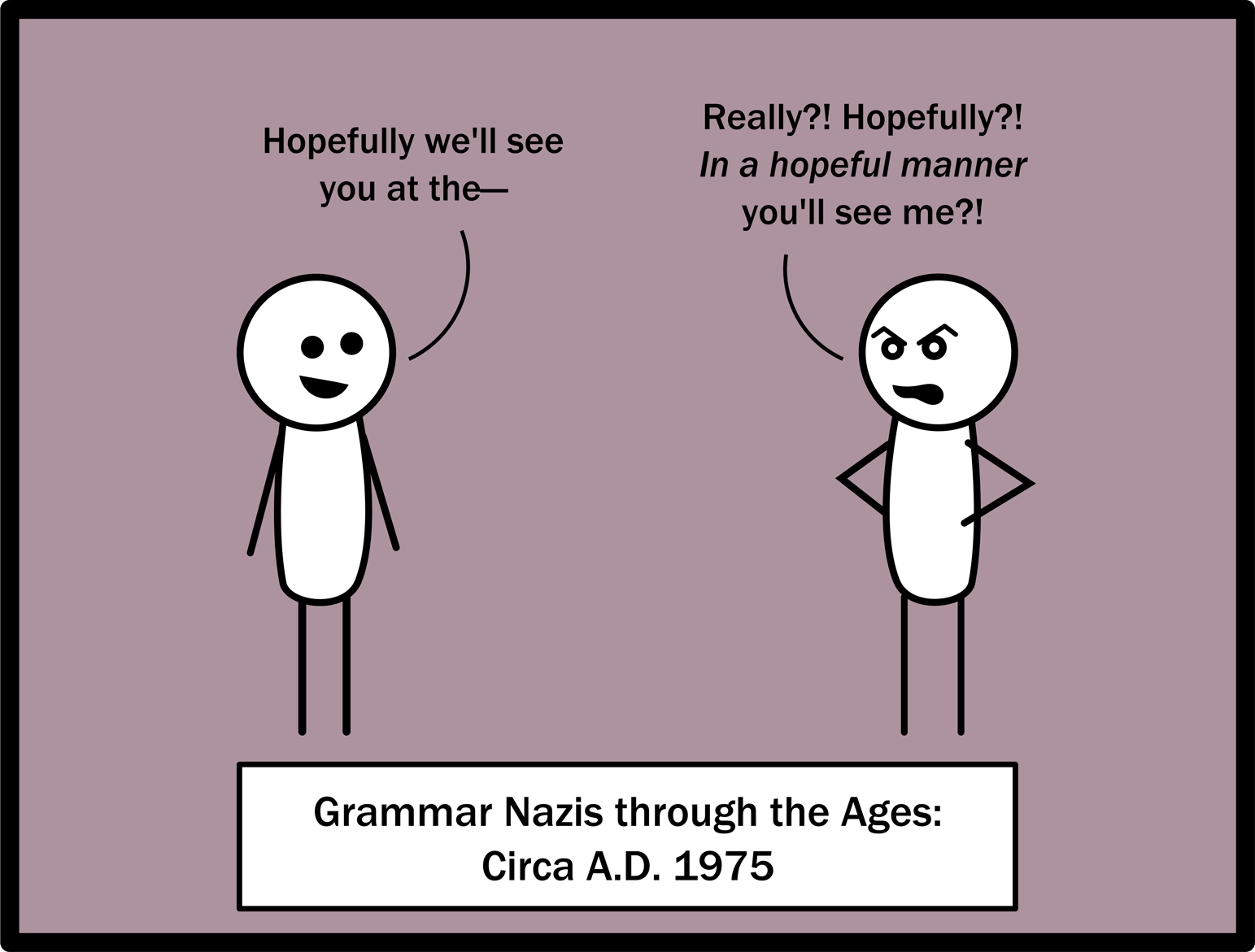 It never fails to amaze me the outrage that people can muster up about language use. An example from the recent past lies in the innocent and well-meaning word hopefully.

The English language has a fairly robust tradition of creating sentence modifiers from words and phrases in its lexicon. See surely, certainly, clearly, curiously, oddly enough, be that as it may, however, regardless, and so forth. Syntactically, these words and phrases shift from a lexical to a rhetorical meaning when they enter the sentence modifier position (the Complementizer Phrase, found at the head of our minimalist CP-TP-VP  sentence structure).

In this shift, they undergo a process of linguistic bleaching: their literal meaning gets expunged and replaced with a rhetorical/conversational meaning instead. So, for example,

We never think that clearly at the start of a sentence means in a clear manner, and hardly anyone gives a second thought to the present-subjective mood of be that as it may. (Count me among the exceptions to that “hardly.” But the subjective mood is a linguistic amusement to me, so there it is.)

Why, then, the great fuss over hopefully?

The first attested use of this word as a sentence adverb comes from the 1930s. It gained popularity in the 1960s, and that’s when chaos erupted, so to speak. The grammar gatekeepers did not like it. They denounced it in print. They blamed the Germans (yes, really). When it crossed over the pond, British gatekeepers derided it as an Americanism. Strunk & White (1972) declaimed it.

“It lacks a point of view when it’s used that way!”

The outrage multiplied for a decade and more until it reached its peak in the mid-1970s.

And then it atrophied. Scholars who had denounced its use resigned themselves to inevitability. Some of them retracted their position. Some even decided to champion the word.

And yet, decades later, the rancor against it lingers.

If you look up “hopefully” at Dictionary.com, you get three different sources cited and three different attitudes in those sources. The first declares its sentence-modifier usage to be “fully standard in all varieties of speech and writing.”¹ The second claims that it “has now become acceptable in informal contexts.”² The third, in its snootiest possible accent, says simply that it is “avoided by careful writers.”³

Hopefully that third source doesn’t mind me quoting them here. I mean, hopefully they understand by now that the English language is fluid, that it likes to change and that this is hardly the worst infraction it’s performed in its thousand-year history. Hopefully.

Because I’m pretty sure this one’s here to stay, folks. At least for a few more years.