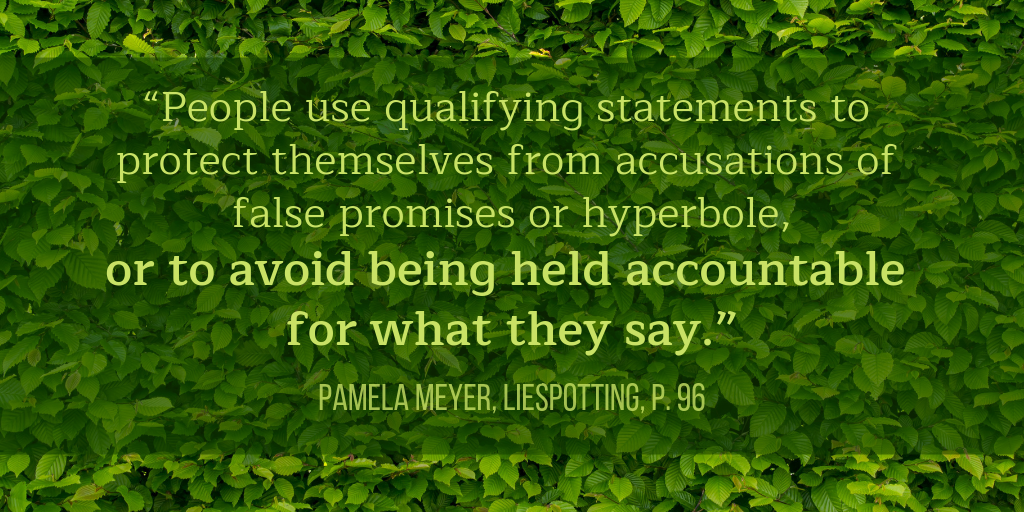 We complete the barrier object series with our final entry: hedges and qualifiers.

These rhetorical tidbits come in many forms. The terms “hedge” and “qualifier” are interchangeable. They denote words or phrases that damper the strength of a statement.

Grammatical hedges are literally named after a type of barrier. When we hedge, we use defensive language, something to retreat behind should anyone question our words. This is the rhetoric of the lawyer, the politician, the blogger, pretty much anyone in the service industry… and, well, everyone.

Everyone hedges to some degree or another. When you hedge too much, though, you look like a weasel.

In this category we have “tempered” linking verbs and verb phrases. Consider the softening effect of the following:

“He seemed angry” literally means there’s a possibility he wasn’t, but when you hear this spoken aloud, you assume the person in question was angry and the speaker is too polite to say it directly.

Similarly, “I tend to sleep in on weekends” comes from the mouth of someone who definitely sleeps in every weekend they possibly can but doesn’t want to sound like a lazy schmoe.

Politeness plays a huge role in hedging, as does conversational manipulation.

As a subcategory of verbal hedges, we have the conditional modals may, might, could, should, and would. If you compare them with their more solid modal counterparts, the hedge becomes glaring. For example,

Speaker #2 ain’t playing any games. Modal hedges shift from that concrete meaning to one with more wiggle room:

And this simple shift makes a world of difference in responsibility to follow through.

As discussed in the article on Expanded Verb Structures, simpler structures are better. If you can eliminate a hedging modal for its concrete counterpart and still maintain the integrity of your narrative, good. But if you can eliminate the modal all together, better.

This type of hedge is a “fine tuner.” It emerges when a speaker wants to be meticulous about their language, again, to cover their backside from questions that a more direct discourse might elicit.

Adverbial and adjectival hedges gravitate toward certain semantic categories, including:

But here’s the thing: in most cases, these “specifications” add nothing more than word count. Someone who is “a little tired” is tired. If you’re “kind of annoyed,” you’re annoyed. When the hero makes a “slight grimace,” he grimaces. We don’t have to shy away from direct speech, particularly in expositional narrative.

As for the “untruth” category, its opposite falls under the linguistic pattern of bolstering, which is yet another tell for deception. We’ve all encountered a boor who interrupts a conversation with, “Well, actually…” and then proceeds to give their opinion rather than fact.

It’s a long-standing joke that anytime someone begins a statement with, “Honestly,” or its equivalent, they’re about to lie. This includes longer phrases like “in truth,” “in fact,” “in all candor,” “in all honesty,” and so forth. The instant we try to convince others of how genuine we are, we plant a seed of doubt.

If you’re shoring up your work with bolsters, they will have much the same effect as hedges.

They are both barriers.

Hedge types expand into the rhetoric layer of language with phrases that temper responsibility. For example:

Each of these leaves more than enough room for a speaker to weasel out of their words. Unless you absolutely need them in your narrative, they are prime for culling.

Hedges and qualifiers are 100% okay in spoken dialogue, as long as they suit the character. So too are they appropriate for narrative, but only if they add the nuance intended. In many cases, there are better alternatives to a hedge.

If, for example, your hero favors your heroine with a “slight smile” and the slightness of it plays into the scene, it’s appropriate. But a dozen other descriptors could convey the same effect or a better one.

Or, if you’re going the analogy route,

All of these examples build on that more generic hedge of “slight.” But “slight” has its own charm, too, as long as it’s not modifying everything under the sun.

Up next: The Cooperative Principle

Nestled among the marked (or “dispreferred”) behaviors of discourse we find a lovely little linguistic feature known as “hedging.”

Hedging is the default refuge of anyone who doesn’t want to be held 100% accountable for what they say. The speaker tempers their words to lessen the impact of their speech, thereby creating a verbal trap door through which they can escape should the need arise.

It’s the linguistic equivalent of tiptoeing and a useful hallmark of lawyers, politicians, bloggers, and anyone else who might worry about getting caught in a lie by their own soundbites.

Shifty behavior isn’t the only factor that lends towards hedging. Politeness plays a strong part as well. You don’t want to speak in bald absolutes? There’s a hedge for that.

Modals provide a ready means of hedging. Compare the solid, reliable sense inherent in can, will, shall, and must with the weaselly, conditional sense of may, might, could, should, and would. You can almost hear the retractions formulating in a speaker’s mind:

As modals, by their definition, indicate a speaker’s mood toward the statement they utter, use of the conditional models is a dead giveaway for a hedge. The speaker may follow through, but then again, they might not.

Verbal hedges come in at least two varieties. The first is the pull-your-punch linking verbs that people like to substitute for the solid “to be”:

The second type is a shell verb that dilutes the main verb of a sentence to allow for exceptions to the statement. For example,

Such hedges can be useful, but remember: the longer the verb phrase of a sentence, the weaker its effect. In strong, efficient writing, verbal hedges get the boot.

Adverbial and adjectival hedges are, as their name implies, adverbs, adjectives, or adverbial phrases that qualify another lexical part of speech (noun, verb, adjective, adverb, or preposition).

Some of these hedges reflect “smallness” in their literal meaning, the better to minimize the rhetorical impact of the word or message they modify:

The “frequency” adverbs often and sometimes serve to temper their absolute counterparts, always and never.

My personal favorite with adverbial hedges is when they pile up on each other, à la kinda sorta (“I kinda sorta like you, Jimmy.” *blushblushblush*) or when they directly contradict the adverb they’re modifying.

Yes, in a strange twist of language, kind of really is a hedge that augments and diminishes at the same time, people.

When it comes to narrative writing, adverbial and adjectival hedges are mostly superfluous (YSWIDT, haha?) and can be edited out. A slight snag is a snag. A minor hiccup is a hiccup. And if you’re a little late, you’re late. Period. No qualifying necessary.

Except when you kind of really need to, I mean. And then it’s pretty much okay.