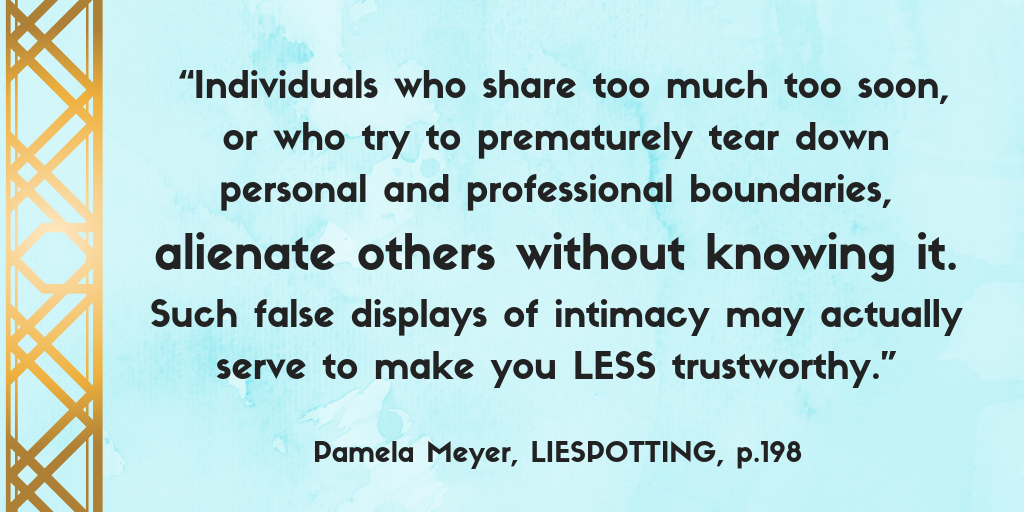 Wordiness is a classic tell for deception. Instinct says that if you have all the information, no one will question your story. Sadly, instinct is wrong.

Too much information triggers skepticism in your audience even if they don’t overtly detect the lie itself.

A Cornell University study in 2004 paired 66 participants for text-based conversations. The researchers were studying online communication, but in a form that precluded video or audio input. (This becomes relevant to us as writers because text is our treasured medium for dialogue.)

Before the study began, the researchers pulled half the participants aside and instructed them to lie about two of the five topics they would discuss. They gave the liars five minutes to prepare, and the study went forward.

None of the lies were detected.

However, when the researchers went back and analyzed the conversations, they discovered that the liars used approximately 30% more words when they lied than when they told the truth.

That’s right. Fabrication bloated their word count by a healthy 30%.

But that’s not all.

Those being lied to used more words in response to the lies. Of greater significance, they also asked more questions. Somewhere in their brain, whether conscious or subconscious, their skepticism triggered and reacted.

Too Much Information In Writing

As fiction writers, we already have one strike against us. Somewhere behind that suspension of disbelief, our audience knows we’re making stuff up. When we glut them with too many details, we stoke that instinct to overthink, to question.

In your average novel, too much information can appear in the following forms:

We’ve all been there, stuck reading a book where the narrator rattles on for pages and pages about ultimately skim-able schlock. The MC’s entire life history. Every piece of furniture crammed into a room, including its age, style, material, and exact spacial placement. Memories and mental processing ad nauseam.

If it plays into the plot, it’s either tangential, or grossly inefficient.

Symptom of a Greater Problem

This degree of detail reveals an author too afraid to trust their reader. They exercise tight control over every angle of their story, lest the reader form an inaccurate picture of events.

But books, despite their fixed sequence of words on the page, are not static. Every reader recreates them anew, informed in that creation by individual experience and understanding. No two readers will ever produce the same mental imagery for a book.

And that’s a good thing.

One of the most powerful tools an author can access is their reader’s imagination, but imagination intrinsically thrives on the unknown. The engaged reader will pick up on subtle cues and run with them. They’ll fill in minor gaps for scenery and settings in their anticipation for what is yet to come.

You might have in mind the exact 19th century antique mahogany Chippendale dresser that graces your main character’s boudoir. But do you really want your reader’s brainpower focused on trying to conjure its likeness? Unless it plays a central role in your plot, the answer is no. Details should be evocative, not completely inaccessible, and not so profuse that they overwhelm.

Clot your story with too much information, and your reader’s imagination may well fail to spark.

Worldbuilding can be an author’s best friend and their worst enemy at the same time. The greatest problem with these exercises, from the simple to the mind-bogglingly complex, is the danger that they might trick us into including all those details in our book.

We did the work. We created monetary systems and team sports and land formations and political dynasties, and we can’t let it all go to waste. The reader needs to know we did our work.

Except that the reader doesn’t need to know. They need a final draft polished and focused upon its themes, not a glut of extra information that muddles more than it enhances.

Worldbuilding is awesome and empowering, but its primary purpose is to acquaint the writer with the inner and outer workings of their own creation. When we shoehorn every last category or detail into our draft, we’re just as likely to inspire annoyance as awe.

Too much information weakens a story. (As my next post will illustrate.)

Up next: Case Study: Austen vs. Heyer