This week I completed my reformat of The Legendary Inge and officially transferred it over to Eulalia Skye. The revamped edition is now live on Amazon in both print and eBook!

Feast your eyes on this beautiful cover! 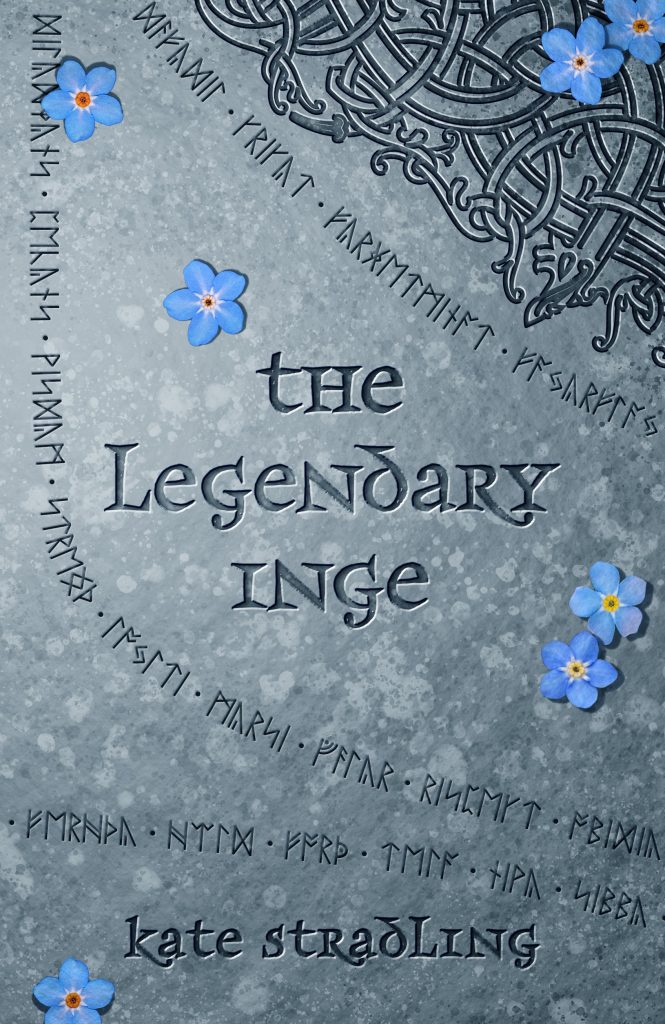 What’s new in this edition?

If you previously purchased The Legendary Inge as an eBook, you have the option of updating your copy in the “Manage Your Content and Devices” page of your Amazon account. Amazon deemed this a minor quality update, so will not be notifying previous readers. Consider yourselves notified here.

Bear in mind that, due to the new formatting, the kindle locations have changed within the interior file. So, if you marked any passages in the old version, they might map to the wrong section in the update.

(I don’t know how, but Vellum apparently condenses the locations. Maybe it has more efficient coding or something. I only deleted like two words in my typesetter’s edit, so the book contents itself is basically identical to the original, minus a few embarrassing typos.)

And now for something completely different.

The Legendary Inge: A New Cover

My original cover took its inspiration from the Franks Casket, one of my favorite relics of the ancient world. In planning this reboot, I looked to a different style of Nordic relic: runestones. These monuments dot the Scandinavian lands, patterned with Viking carvings and winding runic text.

With that inspiration in mind, here’s the breakdown of elements in this revamped book-skin. 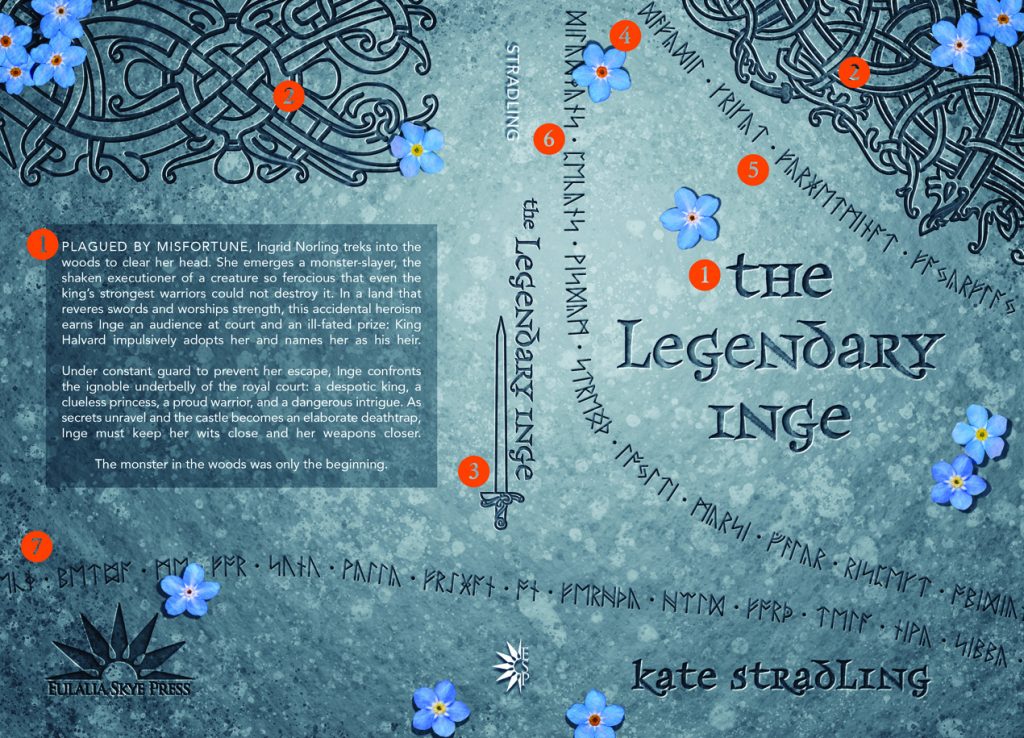 Not sure why this looks so green. Maybe because I made the .jpg from a CMYK-coded PDF.

“Oh, hey,” you might say. “Those runes are pretty awesome.”

And you’d be completely right. The runic alphabet (aka Futhorc, so named for its first 6 phonetic sounds) served as the writing system for Germanic and Scandinavian languages 1200 – 1800 years ago. Its design, primarily straight lines, makes for easy carving into hard surfaces.

If you want to play with futhorc runes, look no further than futhorc.com. This site makes phonetic transliterations from modern English words. It’s a lovely tool for all your runic needs. You must have the Junicode font if you want to use those transliterations digitally anywhere else, but that’s a free download and an extremely useful addition to any font inventory.

I used futhorc.com to verify the weapon names. I had to do the Old English lines of Beowulf myself, but I got to use stan and ear, so I have no complaints. (Stan reportedly has only one real-world attestation, and ear apparently belongs to Hel. So metal.) Anyway, not sure why I’m so obsessed with runes, but I jump at any chance to use them, so.

“And now, Beowulf, best of men, I wish to love you in my heart as my son. From this time forth, keep well this new kinship.” 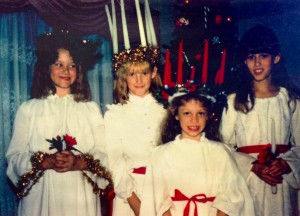 It’s all fun and games until someone’s hair catches fire.

My grandmother is a full-blooded Swede and an avid genealogist. The daughter of immigrants, she honored her heritage throughout her life and distilled drops of it upon her children and grandchildren. Her garden had tomten instead of elves. Her house had orange dala horses and blue-and-yellow motifs. Christmas Eve with its smorgasbord was the focal holiday instead of Christmas Day. And Denmark was inherently inferior. (I’m sorry, Denmark. I’m sure you and Sweden are on much better terms now than you were a hundred years ago.)

We ate Swedish pancakes, and pepparkakor, and meatballs. A badge of honor went to anyone brave enough to try the pickled herring. We celebrated St. Lucia’s day with saffron buns and candle wax in our hair. Sweden, or an echo of it, was in our blood.

When I was in my early teens, Mormor took a handful of us cousins with her to the family history library, there to search out a collection of missing great-something half-uncles. Their father’s surname had been Kjallstrom, but the army changed it to Valler or Waller. One of the sons, as Valler/Waller, enlisted as well, only to be given the surname of Holst. The three brothers had immigrated to the Midwest, where their trail went dry.

Mormor didn’t know whether to look under Valler, Waller, or Holst, or even Magnusson (the patronymic of their father’s given name). We found them under Holst (all three of them, despite only one of them having received that surname from the army), in Iowa.

What, you might ask, does any of this have to do with Beowulf? All through my formative years, I was taught to value anything even remotely Scandinavian. The Old English epic takes place in Denmark and Sweden (or Geatland, as it’s called in the poem, and Götland, according to modern maps). In my years as a Beowulf skeptic (described in this post), its connection to Sweden was probably the only thing I thought worthwhile about it.

Except that it mostly took place in Denmark. See the above note. (I’m sorry, Denmark! I really am! You are wonderful in your own right!)

So, growing up, I was programmed with elements of Swedish culture and tradition—elements a hundred or more years removed. Thus, when a handful of lines from Beowulf spawned a story idea, and then that idea jostled around in the mental cocktail of my brain, what emerged—almost immediately—was heavily influenced by that Scandinavian heritage. It was as though all those childhood ghosts rose up as one and said, “This story is ours. We claim it.”

And, ultimately, I wrote it to entertain my grandmother.

She turned 90 on March 26. Happy Belated Birthday, Mormor! This one’s for you! 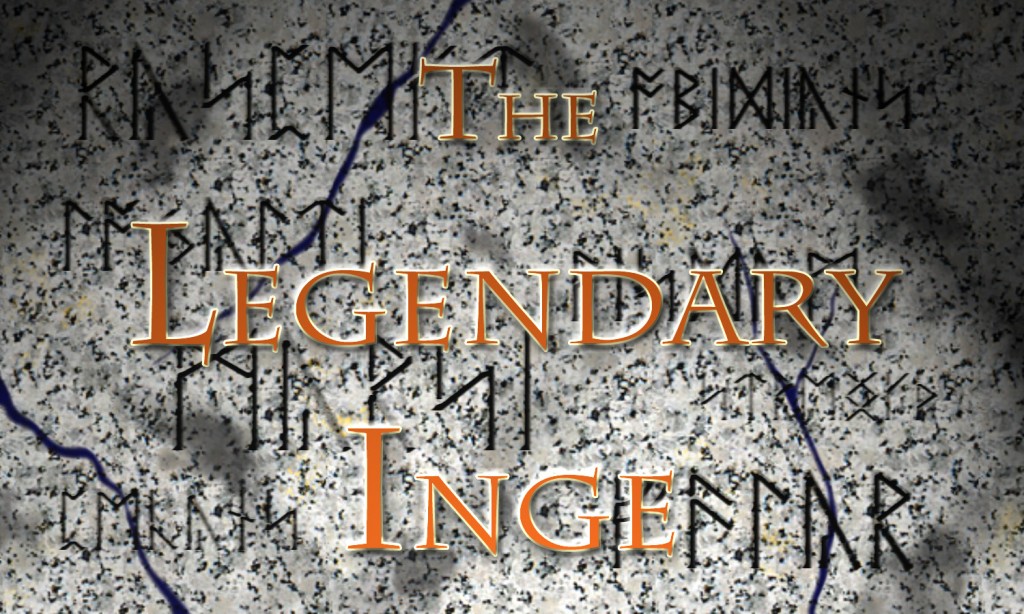 Under constant guard to prevent her escape, Inge confronts the ignoble underbelly of the royal court: a despotic king, a clueless princess, a proud warrior, and a dangerous intrigue. As secrets unravel around her, the castle threatens to become an elaborate deathtrap. Inge must keep her wits close and her weapons closer. The monster in the woods was only the beginning.

Despite the Scandinavian and classical literary influences, this book is firmly planted in the fantasy genre. Look for it in June. Probably. 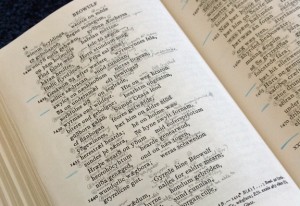