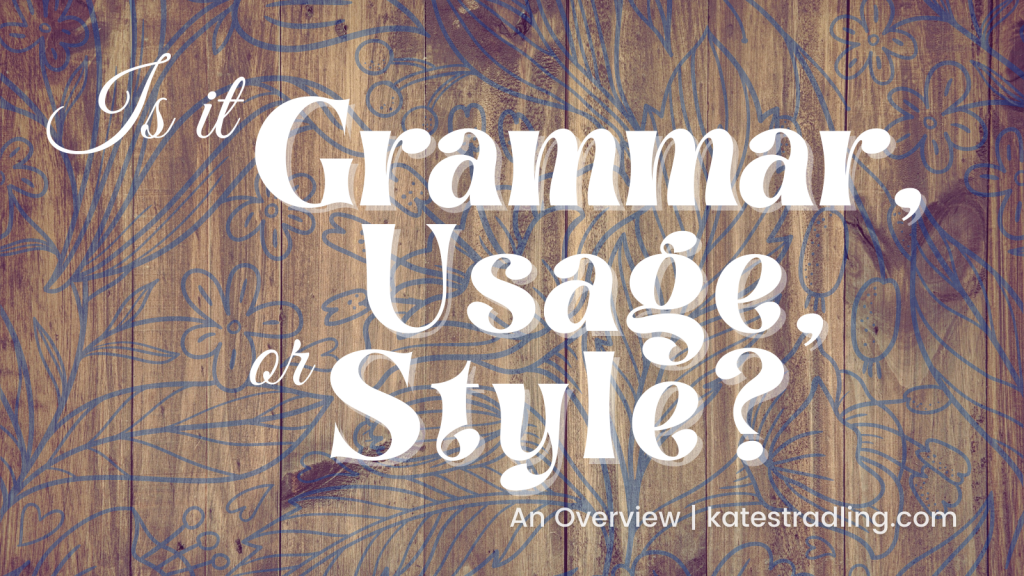 In my local writer’s group last month, I had the assignment to teach a lesson on anything under the sun that was writing-related. And, being that my expertise lies in the sere landscape of language structure, I opted to explore the differences between grammar, usage, and style.

We often hear these terms used interchangeably. More often, people lump all things language-related into the “grammar” category, which kind of drives my pedantic self crazy. So, in the interest of better understanding all around, here’s a quick run-down for your reading pleasure.

Long story short (too late), many, many “grammar” complaints are actually a matter of usage or style.

Grammar involves the building blocks of language: parts of speech, clause and sentence structures, and how those sentences tie to their surrounding contexts. 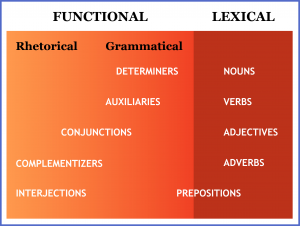 Look at all those pretty parts of speech!

Every part of speech has its own set of features and rules for how it interacts with other parts of speech. For example, verbs can have features of tense, mood, aspect, and voice. They also have agreement rules for when they combine with their subjects (nouns or pronouns), matching in number.

Languages vary in how they apply their rules. Take the same example above, but in Hungarian:

(Also, apologies for my Hungarian. 1,000 days on Duolingo has not an expert made in me, haha.)

And of course, as parts of speech combine into phrases and clauses, additional rules of word order, movement, subordination/coordination, etc., come into play.

Because grammar is descriptive, it abstains from value judgements. It doesn’t even have to make semantic sense. Noam Chomsky’s infamous sentence, “colorless green ideas sleep furiously,” is 100% grammatical, even though the words repeatedly contradict themselves.

In addition, aberrations in grammar can signal a restrictive code (a different regional vernacular, for example). They are usually systematic in their own way.

I.e., they indicate a different pattern—a different grammar—at play. There is no such thing as an inferior language or dialect.

Common grammar mistakes in writing include the aforementioned subject-verb agreement, inconsistent verb tenses, and, on the broader structural level, misplaced modifiers or ambiguous sentence structures (where two separate meanings exist depending on how the reader reads the sentence).

If it’s not a structural issue, it’s not a grammar mistake. Which brings us to

“Usage” specifies how native speakers apply their rules of grammar. It defines the standard within a language community. In this realm you will find such enlightenment as 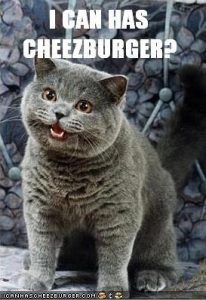 So because usage deals with predominant standards, value judgements abound. Dictionaries of Usage exist for the express purpose of explaining what is correct vs. preferred vs. incorrect.

Violations can be nonstandard, colloquial, dialectical, or informal. But note, none of these are necessarily wrong, except that they’re not commonly used or preferred by the community from which the standard originates.

Also, keep in mind that usage rules consider both past and present patterns, and are thus changeable over time. You might think “irregardless” isn’t a word, but usage contradicts you.

There are too many to list, even in categories. I own a 971-page usage dictionary that expounds on correct vs. incorrect word choices, and it’s by no means all-inclusive.

To be blunt, no one has perfect usage. We each apply patterns as we understand them against an ever-changing standard.

And if you think that’s unsettling, just wait until you get a load of

Here we have arrived at the bane of every writer’s existence. Style gives guidelines for preferred usage, particularly when multiple options exist. It is the method by which we choose what language will best communicate to our desired audience the nebulous soup of ideas that swirls around in our brains.

And it is subjective to whoever dictates it.

Examples of guidelines for preferred usage

In addition to established style guides, every author has their own style. This is the arena of literary devices: irony, alliteration, litotes, diction, etc. Style includes how a writer chooses to employ (or ignore) tropes and figures of speech in conveying their message.

As with Usage, value judgements abound here, but also, STOP JUDGING PEOPLE FOR USING THEIR PREFERRED STYLES. JUST ACCEPT THAT YOU’RE NOT THEIR INTENDED AUDIENCE AND MOVE ALONG.

Style varies from guide to guide and author to author. It can always improve, because writing is a craft that we constantly refine.

Everyone has an individual perception of grammar, usage, and style. Everyone. None of us is infallible, because we speak a language in constant flux.

Combined, these three elements create your literary fingerprint. This is how linguistic analysis can determine whether an anonymous work was written by a particular author. It’s why no one else can write that story that’s burning inside of you the same way that you would write it.

By distinguishing these three terms from one another, we can better develop our understanding and proficiency in each. More importantly, I hope, we can exercise greater compassion toward others in their usage and style choices.

Best wishes to you all!

For more information on this subject, check out the Grammar, Usage, and Style tabs at Grammarist.com, Merriam-Webster.com’s Grammar and Usage topics, the Chicago Manual of Style, Strunk & White’s Elements of Style, the Publication Manual of the American Psychological Association, the MLA Handbook for Writers of Research Papers…

So many resources. Just type “grammar usage style” into the search engine of your choice and enjoy the deluge.