This post is 100% self-indulgent. If you’re coming to the table hoping to learn anything linguistic, move along, little bronco.

If, on the other hand, you’d like a little insight into the resident author’s neurosis, pull up a chair.

The Year in Review

I have semi-jokingly referred to 2016 as my “sabbatical year.” My original goal when I started indie publishing was to put out a book a year, and from 2010 to 2015 I did exactly that. At the end of last year, I looked at my work, saw that it was good, and thought it might be nice to take a rest. 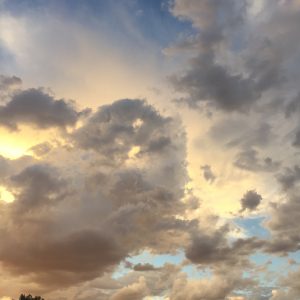 Clouds, because I can. (Also, light and shadow in beautiful interplay.)

Not that I actually rested, mind you.

The real issue going into 2016 was that, although I had several completed manuscript drafts, I didn’t have any I was aching to publish without first performing major surgery on their plots and/or structure. And I couldn’t make up my mind, and I was busy with a million other things, and I’d already absolved myself of my usual June deadline.

I was blogging three times a week—which I knew was unsustainable, but when you have a demon to exorcise, you get that sucker out rather than scheduling its extraction forward into measured deadlines—and I was participating in two weekly critique groups, in addition to twice-weekly volunteering and two separate duty-heavy leadership positions. Plus, you know, the occasional freelance job and four active book projects.

The nervous breakdown hit me sometime in March, as best I can recall. It disrupted my sleep, affected my health, and rendered me constantly on the verge of an anxiety attack. I was Lucy trying to keep up with the accelerating assembly line of chocolates, and falling short in my efforts.

So, I “cut back.” I withdrew from one of my critique groups and saw my doctor to confirm that there wasn’t anything chemical going on.

On my mother’s advice, I put all of my book monsters back in their cages, with the rule that I would only take one out at a time. I semi-broke the rule by keeping a second and sometimes third project window open in Scrivener, but I didn’t look at them… often. I continued forward with my single project and single critique group and scheduled a break in my thrice-weekly blogging near the end of the quarter, so that I could do a formal project inventory and maybe get my bearings.

The project inventory came back with this result: “Kate, you have way too many active projects to be blogging three times a week.”

Unfortunately, it seems that if I don’t keep to a rigorously insane schedule, I don’t keep to any schedule at all. Hence the sporadic posts since that inventory. (Sorry, but not really, haha. Sanity first, guys.)

In June, as my two-week hiatus was coming to a close, my grandmother died. This event was 100% expected, as she had entered the end-of-life care phase at the start of the year. She has lived down the street from me since I was a teenager, and was mentally sound until the end. My sainted mother basically moved in with her and acted as a primary caregiver to allow her to pass within the comfort of her own home. 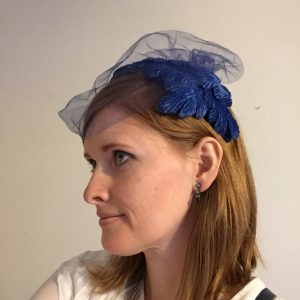 My inheritance, purchased at the family estate sale. Because what better memento than an adorable blue hat?

If you are familiar with end-of-life care, you know it is mentally, emotionally, and physically exhausting. My secondhand experience—trying to support my mother as she supported hers—revealed a whole slew of weaknesses and frailties within me. I wish I had been better than I was, but under the weight of all my other responsibilities, I did what I could.

My grandmother passed peacefully in her sleep, a blessing for her and for all of us. She wanted a concert instead of a funeral, so we gave it to her. She is now hard at work on the other side, reunited with her sweetheart and countless other souls.

Death, however peacefully it may come, brings with it a somber weight of perspective for those left behind. I will shamelessly admit that I said, “Aw, screw it,” to all non-essential activities for the next six weeks.

For the last two weeks of July, I holed up in my house and wrote 20K words. It was the most I had written in a long spell, and I thought I was wrapping up that project until I took it to my critique group and informed them that I only had five chapters left in the draft.

They informed me that I was wrong, and that I needed to go back to my plotting board.

I spent August dragging my feet on their well-reasoned advice. 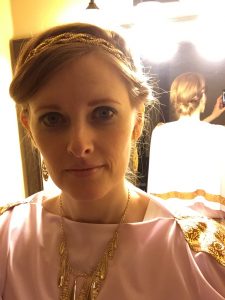 Cosplaying as Penelope for the ANWA Writers Conference Character Gala. Costume courtesy of my amazing and talented mother.

In September I attended the ANWA Writers Conference for a third year running. The conference was phenomenal. I hit an energetic high of associating with like-minded authors and friends, I learned some lovely tips on harnessing better productivity, and I broadened my sense of the writing craft. I was extremely choosy in which classes I attended, and that worked to my benefit, anxious introvert that I am.

My one regret is that I didn’t spring for a headshot, because the photographer they had was outstanding. I am totes jelly of the beautiful profile pics some of my author friends now sport.

October is upon us. I am still slogging away at the same project I selected back in April. My critique group is still pressuring me to refine it. If I’m lucky, I’ll finish the draft by Christmas.

(It was supposed to be done by now, if only people would let me have my crappy way with it.)

I’m on the fence about NaNoWriMo. It’ll be the first year since 2008 that I haven’t participated if I decide to forego the experience, but I’m past the point of doing things for the sake of tradition. I reached my 50K words last year, but I have yet to finish that draft (another monster waiting in its cage) and the last thing I need right now is to add to my list of unfinished projects.

They scream at me from the corners of my mind: “Work on me! You can’t leave me in this state forever!”

Mentally, I feel like I’m emerging from a fog, where I can maybe sort of manage having goals again. I still have a billion things on my plate, but by the Grace of God alone I can handle them now. Throughout this year, He has been ever patient with and watchful over me. Where He wants me to go from here is a great mystery, but it’s always fun to see His work unfold.

I can say this, though: 2017 looks to be a beautiful year. Here’s hoping I can contribute to the beauty of it.