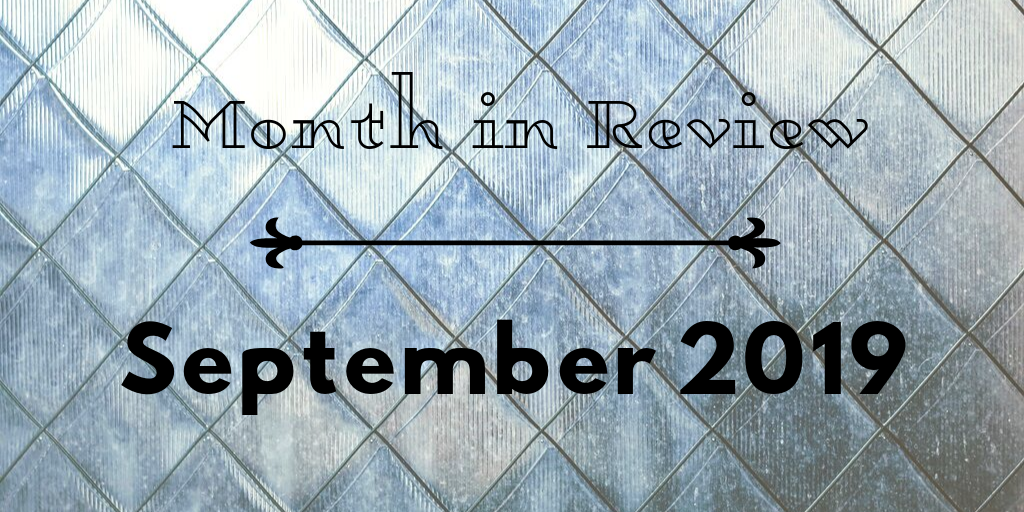 September, that lovely transitional month, has come and gone. I knew it would be busy, and I planned accordingly. Just, with everything else happening, I neglected to set up a blog post in advance.

So here’s the official announcement: Annals of Altair Book 3, OLIVER INVICTUS, is now available on Amazon. It dropped back on the 18th, and it is, apparently, more high-tension than I realized.

One of the problems with the whole pre-order process is that it’s easy to set up a title and then walk away. In this case, though, that “problem” was a blessing. Here’s what’s been happening.

I had a doctor’s appointment to evaluate a treatment plan I’d been on for the previous 3 months. Without going into a lot of details, basically I have a chronic (and genetically caused) folate deficiency. Because it was undiagnosed for most of my life, and because I had put myself into a cycle of ill health in the months prior to diagnosis, my system was haywire until I sought treatment.

The good news: most of my numbers vastly improved. Like, cholesterol down 30+ points, blood sugars back into normal ranges, vitamin D in double digits again (and nicely high double digits, hooray!).

The bad news: one of my numbers was worse. I kind of expected it. There’s family history involved, and I’ve lived my whole life knowing it was a possibility. Essentially, the damage at this point was too far along to reverse. So, my doctor tweaked my treatment plan, and I am now officially tied to a prescription.

(I’m also tied to a methylfolate supplement, but that’s over-the-counter. If you feel like you’re living life with your brain wrapped inside a lead blanket, maybe consider getting tested for an MTHFR mutation.)

After spending most of September on this new plan, I FEEL AWESOME.

Relatively speaking. I’m waking up alert instead of feeling like someone poured a load of mud into my skull while I slept. I have a happier, more hopeful outlook. Life has possibilities again.

It’s amazing the difference a couple of little chemicals can make.

I celebrated my birthday. I’m now 39, for anyone who is nosily curious. Not sure why, but I’ve loved that number since I was a kid (it’s triple-thirteen, plus 3²=9; just some beautiful patterns happening). It was a good day, quiet but spent with people I love.

That same week, I attended the annual ANWA Writers Conference. I went with some of my specific writerly roadblocks in mind and got some excellent insight for how to maneuver through them. Plus, I got to reconnect with some of my favorite fellow authors and friends, amazing creatives who are bringing light and laughter and beauty into the world.

It was good times.

And, of course, the middle of September saw the launch day for Oliver Invictus. Thank you to everyone who pre-ordered, and to those who have since bought, read, rated, and reviewed. You people are the best.

End of the Month

The main reason Oliver had such a low-key debut is that I was leaving the country shortly thereafter, on a trip whose plane tickets I bought last February before I knew I’d be finishing a book. While his story uploaded into readers’ kindle clouds, I was slowly compiling my necessary supplies and wrapping my brain around the prospect of traveling for a week.

Mostly I was worried about my cat. Would she be here when I got back? Would she drive my mother insane during the interim?

Yes to both questions, as it turns out.

I went to the UK with the ever-intrepid Rachel Collett. We visited Bath and Welshpool, and had an overnight in London before flying home. I think I successfully converted her to travel by train. (We don’t do trains in the desert southwest. I mean, they exist, obviously, but the only passenger trains are specialty ones like the Grand Canyon Railway or the light-rail that runs through the Phoenix metro area at 25 mph.)

Living my best life in the Roman Baths. Yes, I drank the water, but not from this crusty pool!

Bath is phenomenal. Some highlights:

Netflix was filming their upcoming Regency series, Bridgerton (based on the Julia Quinn novels, which I have not read), so some streets were off-limits to visitors. It was fun to catch a glimpse of actors in period clothes, though, and horses and carriages and an entire street covered with gravel to hide the modern pavement. One of the buildings had a green screen up the side of it so they could modify the setting in post.

People kept apologizing for the weather, but it was honestly lovely.

Just over the border from Shrewsbury, England lies the town of Welshpool, Wales, home of Powis Castle and Gardens. I’ve followed the Powis Twitter account for a few years now, so actually visiting there was an awesome treat. 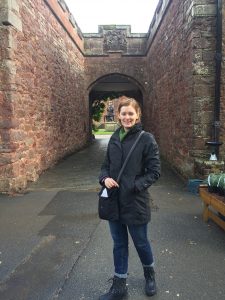 At the Powis Castle entrance, ready for adventure. Ignore my derpy face.

Everything in the castle is authentic, right down to the 2400-year-old Etruscan vases sitting demurely atop the 14-foot shelves in the library (which is stocked with, among other things, much of Empress Joséphine’s personal book collection—just a minor souvenir the family picked up from the continent after the Napoleonic Wars, nbd).

Robert Clive, aka Clive of India (a regular pirate if ever there was one), had a son who married into the Powis family (the Herberts), so his collection of artifacts—bought and plundered—passed to this estate. The Clive Museum on the castle grounds displays many of these items, along with an acknowledgment that some were ill-gotten spoils (which is a step in the right direction, I guess).

The family lived there until at least the mid-1900s, but the castle and grounds now belong to the National Trust. Hence, conservation is the name of the game. Light sensors in every room record daily UV exposure, and one of the volunteers disclosed that if they exceed their yearly quota, they get shut down until January rolls around. So, blinds are pulled low, and castle visiting hours are set, and absolutely NO FLASH PHOTOGRAPHY allowed.

Between the castle tour and exploring the gorgeous gardens, this excursion merited a full day. The bi-polar weather went from sunshine to rain and back again half a dozen times, and I sang silent praises for the pair of duckboots I wore.

When you’re mucking about the loam of Wales, appropriate footwear makes all the difference. 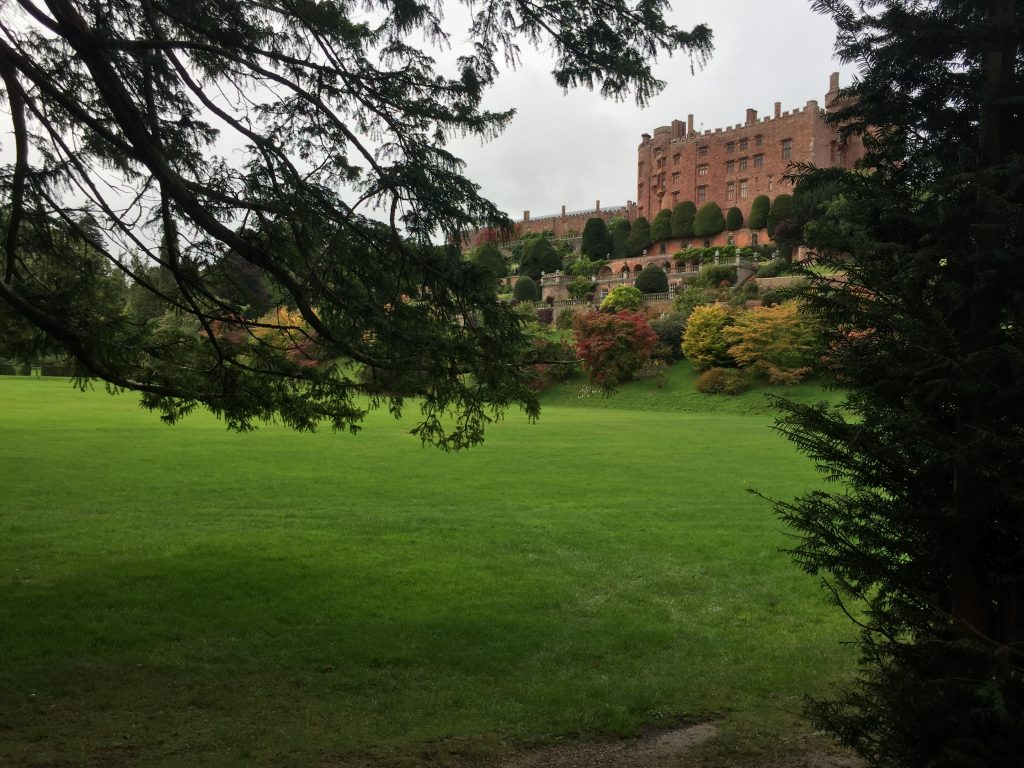 A view of the castle from across the grounds

And that’s how I spent my September.

I don’t usually cram so many events together, but that’s the way things converged this time. Now it’s back to the proverbial grindstone for me.