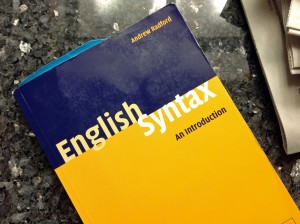 The discussion in this post requires a different view of language structure. For a deeper understanding, I refer you to Andrew Radford’s English Syntax: An Introduction (ISBN 0521542758), particularly pp. 190-193 . Much of this post draws from that source.

Thematic Roles, aka θ-roles or theta-roles (pronounced ‘THAY-ta’ or ‘THEE-ta’), explain the different relationships between Verbs and Nouns in a sentence. For the purpose of this lesson we will regard these two constituents as follows:

So. Picture a foot-race. There are runners, officials, and spectators. Each participates in the race but does so in a different manner: the runners run, the officials judge, and the spectators observe (and cheer or boo, as the case may be). Now, compare that event to a dental appointment, where you have participants, dentist and patient. The dentist examines or operates and the patient receives treatment. A footrace and a dental appointment are two distinctly different events with distinctly different types of participants. Agreed?

Well, if we consider every verb in the English language as an Event, we likewise discover different types of Participants. These are grouped together, just as one might group participants in a foot-race or at a dental appointment with broader categories of participants in any athletic competition or health-related appointment. The commonalities shared across Events produce a finite number of roles for the Participants to play. For grammatical Events, we categorize these Participants into theta-roles.

Radford defines seven theta-roles and their corresponding relationship to the Event (from Radford, Chapter 7, Item (14), found on p.190):

Numbers 4-7 often play ancillary roles to Numbers 1-3. We can easily associate them with prepositions (though they are not restricted to these prepositions alone, or to prepositional phrases exclusively):

If you give a hierarchy of power to these three theta-roles, the King of the Mountain is most definitely the Agent. The Agent acts, instigates, dominates.

I like to think of the Experiencer as a watered-down version of the Agent, that sidekick who looks on from the sidelines, and thus participates vicariously, as the action occurs. (As a side-note, “Experiencer” verbs tend to be the ones forbidden in all of those “Show, Don’t Tell” lectures that writers love to give one another; the Experiencer “tells” of an Event rather than acting in it.)

The Theme, then, is the object being acted upon, a position of little to no active power on its own, even as it undergoes change or receives attention from the Agent or Experiencer.

What’s any of this got to do with Passive Voice? Plainly put, Passive Voice ofttimes occurs when a writer or speaker removes the Agent/Experiencer from the subject position of the sentence (and sometimes from the sentence entirely). Passive Voice is weak because it removes the one who acts and replaces it with the Theme, the object acted upon, the weakest primary participant in the Event. (*Note: this evaluation of the Theme as “weak” applies only to its relationship with transitive verbs, when compared to that of the Agent or Experiencer. As a theta-role in general, it occupies a central and essential position to any narrative writing.)

So why might we be inclined to use Passive Voice?

But here’s the thing: you can keep a Theme in the focus position without using Passive Voice. Compare the following:

In this example, both sentences are conveying the same information. Both have “the murder” as their subject/focus. The first uses Passive Voice, though, while the second uses Active Voice. The verb “to occur” is intransitive (just try putting it in a Passive Voice construct), and it happens to take a Theme as its subject.

And you know what else? You don’t even have to keep the Theme assignment on your noun/focus of choice. If you choose an active verb that converts your passive subject to an Agent instead, the narrative becomes that much more dynamic:

I know which one I find more enthralling. Insert alternative active verbs (e.g., poisoned, tainted, enhanced), and you get a wide variety of possible tones for your narrative, all with the power of Active Voice behind them. (Doesn’t that sound like the tagline for a corny Saturday morning kids’ show? “By the Power of Active Voice, we fight!”)

By using a more dynamic verb, you’re adding an extra layer of information, too. “The murder enhanced an otherwise peaceful Valentine’s Day” doesn’t just tell you that it occurred; it also indicates that someone found value or pleasure in it. That “someone” might be a serial killer, a workaholic cop, or a member of the Addams Family. The use of “enhanced” effectively frames the narrative in any of those instances, where simple Passive Voice would fall short of the mark.

In other words, if you’re using too much Passive Voice in your writing, you need to find some new verbs.

And that brings us to this post’s handy PSA.

How to Eliminate Passive Voice (A Beginner’s Guide)

PLEASE NOTE: Passive Voice is not completely verboten. Used wisely, it can add to a narrative. Used too often, though, it gives a dry tone and erodes the strength of your narration. Nobody wants that. Don’t do it.

A. Identify the theta-roles of the bold words/phrases in the following paragraph.

I have told my reader in the preceding chapter that Mr. Allworthy inherited a large fortune, that he had a good heart, and no family. Hence, doubtless, it will be concluded by many that he lived like an honest man, owed no one a shilling, took nothing but what was his own, kept a good house, entertained his neighbors with a hearty welcome at his table, and was charitable to the poor, i.e., to those who had rather beg than work, by giving them the offals from it; that he died immensely rich, and built an hospital.

[According to my calculations, the count is Theme (10), Agent (2), Experiencer (1), Locative (2), Goal (5), Source (1), and Instrument (1). There’s a reason that “Thematic Roles” are named in honor of the Theme. However, some theta-roles can seem a bit muddy to determine (which is why I did not bold the “he” in “that he lived like…” → it’s the subject of multiple verbs in a list and thus plays multiple theta-roles). If you end up with a different count, feel free to argue with me in the comments.]

B. Revise the Passive Voice from the following sentences by substituting an active verb (or verb phrase) that maintains the same subject and communicates a similar effect. (I’ll allow for some rephrasing in the predicates, if necessary. I’m magnanimous like that. )

2 Responses to Verbs, Part 4: Theta-Roles, or How to Eliminate Passive Voice