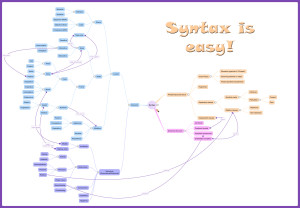 For a definition of “syntax,” click here. (I could paraphrase, but I’d have to give credit anyway, so I might as well send you straight to the source.) Right, then. With that settled, let’s jump right in, shall we?

Syntax categorizes every word in a sentence according to three levels of meaning. This might seem like a tedious endeavor, but it’s actually quite fun. (Disclaimer: It’s fun if you’re a complete language nerd; otherwise, it’s probably pure agony, but I wouldn’t know for sure.) These three levels are lexical, grammatical, and rhetorical. I differentiate them as follows:

The rhetorical level also includes words or phrases that have crossed over from lexical/grammatical categories. In becoming rhetorical, these words are often bleached of a concrete lexical meaning to assume their rhetorical one instead. Context is typically required for proper identification.

Exercise A: Classify the following words as lexical, grammatical, or rhetorical; if words can fit into multiple categories, explain why.

think, care, pretty, upon, you, purple, indignation, am, that, do, play, which, breeze, shoe, only, frequent, clover, image, should, her, not, if, sparkling, consequently, sing, must, however

Exercise B: Identify all the lexical words in the following sentence:

“It was a dark night, though the full moon rose as I left the enclosed lands, and passed out upon the marshes.”
(Charles Dickens, Great Expectations, chapter 53)

See what I mean? Easy-peasy! But what, you may ask, does any of this have to do with actual writing?

Just kidding. No one’s really asking that. But I’ll answer anyway. The lexical words we use are the most important part of any narrative. The grammatical and rhetorical words can bog down that narrative or make it soar, depending on how the writer uses them. A writer who can differentiate between these three classifications is better equipped to strike a balance among them in her linguistic craftsmanship.

Or so I like to think. And it’s my blog, so that’s how it stands.